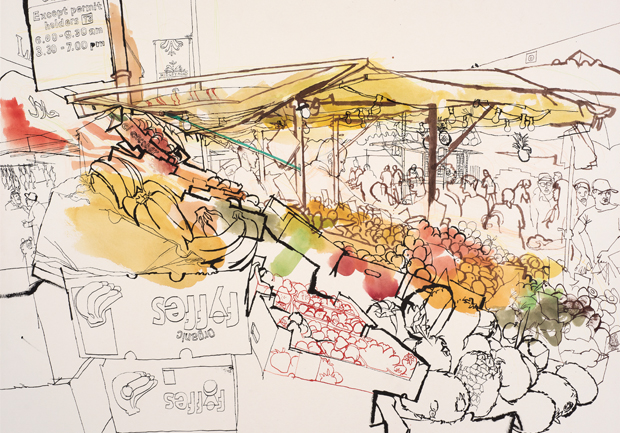 Lucinda Rogers has spent the last few months around Ridley Road Market, conjuring up vivid streetscapes and impressions that note not only the timeless bustle of the market, but the spidery encroachment of development and gentrification. Her drawings arrive at King’s Cross’ House of Illustration for a five-month exhibition starting 28 October.

Speaking to the Citizen, Rogers explained why, when asked by the House of Illustration (the gallery founded by Sir Quentin Blake in 2014) to do something on a changing London, Ridley Road Market “immediately” came to mind:

“I had done one drawing there, spent half-a-day there, and I really liked the atmosphere. Something about the character of the place I liked, it made me think ‘there’s a lot more here to see and find out about.’

“Obviously at the end of the road there’s this gigantic building, this sort of lump, which physically is a completely different world. So it was as simple as looking up from ground level a this building and seeing those two things coexisting.” 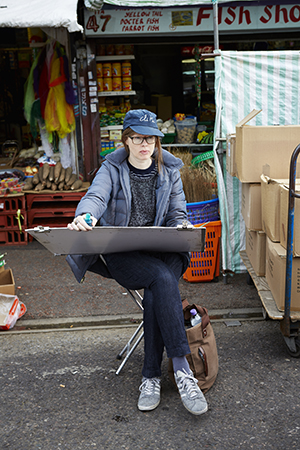 Rogers’ approach to drawing is reporterly and precise – she takes her clipboard and bag of tools out into the streets, and works straight from eye to paper. You may even have seen the bespectacled artist yourself, perched next to a fruit stand or clothes outlet.

It’s a technique she has applied to many a newsworthy scene: she was given special dispensation to record images from the Ground Zero clean-up operation in 2001-2, making 33 images (photography was banned on site), and her work has graced many newspaper columns and features.

This ‘roving reporter’ style allows Rogers’ drawings to overlap her campaigning work – her work on development in the borough has seen her quoted in the Citizen and in other local press on issues like the demolition of the old Mecca Bingo hall.

On Gentrification captures flashes of the many sensations and views that this busy area of Dalston has to offer, be it the wave of colour in Fruit mountain at the entrance to Ridley Road or the cloistered view from within a cramped market stall in View from the kitchen shop.

This perhaps stems from her relative unfamiliarity with the market at the outset of the project. This is a theme in her career – she often starts her drawings with a three second sketch of her first impression and works to that:

“Something that’s familiar is often too familiar to actually see as a picture…In the case of Ridley Road, when you look in detail, it’s all new to me. So I relied on seeing things with a new eye.” 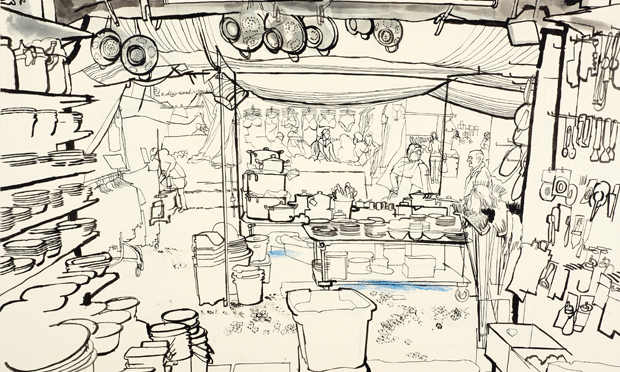 As much as the drawings are celebratory, there’s no escaping the exhibition’s titular issue. So as a campaigning artist, what would she like to see on Ridley Road, should she give it an artistic revisit in a few years?

“I would like to see this market bringing in new customers, because the demographics are changing – for example ones who may or may not live in this new building. [The FiftySevenEast development.] Whether you tailor it to them is another matter…

“Gentrification is more complicated than you’re led to believe, if you scratch the surface – the hipsters like coming down Ridley Road, so let’s get them down there and buying stuff. You can’t change what’s going on, so let’s try and benefit from it so that the people making their living there, who’ve been doing so for decades, can keep on doing that. 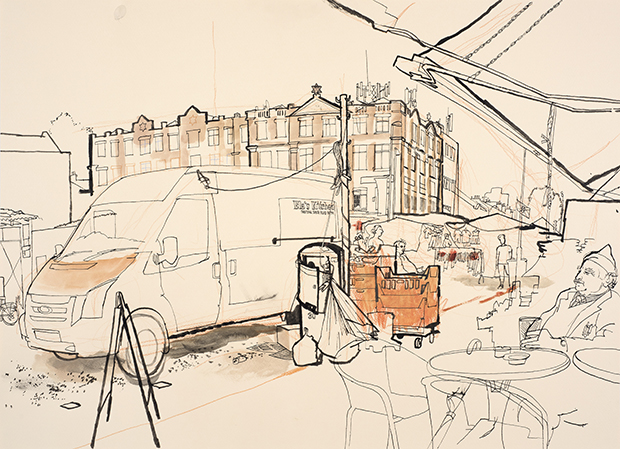 “One of the things that’s clear to me from coming down here is that the social side to the market side is incredibly important… The cultural side too – there’s stuff here you can’t buy elsewhere, culturally important ingredients.

“So in other words, all I’d like to see is a market where customers are still coming, and people are discovering it.

“The fruit and vegetables are fresher than you get in a supermarket – there’s no doubt about that!”

Lucinda Rogers: On Gentrification will be at the House of Illustration’s South Gallery (2 Granary Square, King’s Cross, N1C 4BH) from 28 October 2017 to 25 March 2018

Open Tuesday to Sunday 10am – 6pm. Admission to all three galleries is £8.25 inc. gift aid