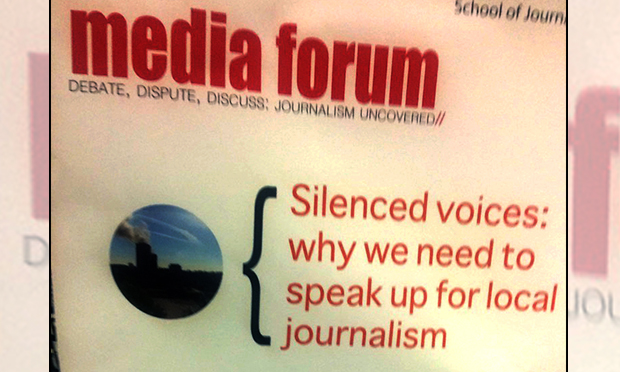 Read all about it: a poster publicising today’s panel discussion

Hackney’s mayor Philip Glanville is to hold court on the “pressures on local journalism and its role in democracy” later today.

A poster for a Goldsmiths University debate, Silenced voices: why we need to speak up for local journalism, reads: “The Grenfell Tower disaster highlighted the necessity for community reporting. So why don’t we hear from the ‘little people’ any more?”

Students and members of the public are invited to join in the discussion with a panel of experts, which includes Mayor Glanville and journalists Hannah Walker, Koos Couvée and Gareth Davies.

The free event, organised by Professor Angela Phillips, takes place from 5-7pm. A Q&A session will follow, along with drinks for those who stay later.

Mayor Glanville has previously praised the borough’s local newspapers, tweeting: “I can’t say enough how much I value, enjoy and love the Hackney Gazette and the Hackney Citizen. I’ve also always engaged.”

The topics for today’s debate were also raised in a London Assembly report, The fate of local news – read all about it, published by the Economy Committee in August.

The then chair of the committee, Labour Assembly Member Fiona Twycross, said at the time: “London needs a strong and credible local press. Without addressing the challenges that the industry is facing and finding solutions, we are at risk of losing one of our most important democratic functions.”