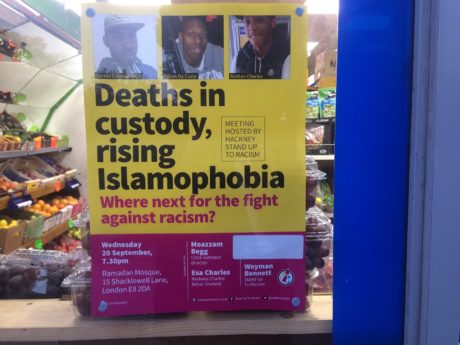 A Hackney anti-racism event has dropped a speaker whose organisation is banned by the National Union of Students for holding “racist views”.

However, the organisers defended another speaker with links to ISIS terrorist Jihadi John.

Hackney Stand Up to Racism’s event in Shacklewell Lane tonight will host Esa Charles, whose son Rashan died in police custody in July.

But Heseltine was dropped after the Citizen contacted the organisers about MPAC UK being no-platformed by the NUS and its record of anti-Semitism.

MPACK UK’s founder Asghar Bukhari raised money for holocaust denier David Irving, and said of a missing shoe that it had been stolen by Mossad.

No reason was given for the change, either to the Citizen or HSUTR’s mailing list in a “correction” email.

However, the group defended its invitation to Moazzam Begg, a former Guantanamo Bay inmate and director of the group CAGE, which has called Mohammed Emwazi – also known as Jihadi John – a “beautiful young man”.

A HSUTR spokesperson said: “There is no truth to the claim that CAGE advocates terrorism or that it has connections with racist, terrorist or fascist organisations.

“It has an honourable record of defending human rights and has been itself a victim of Islamophobic racism.”

HSUTR declined to say why it invited MPAC UK in the first place, or whether Esa Charles was aware of the speakers booked to share a platform with him.

Funding for CAGE was suspended by the Joseph Rowntree Trust and the Roddick Foundation in March 2015 over CAGE’s links with Emwazi.

Amnesty International also cut ties with the group in 2015 after its research director Asim Qureshi refused to condemn FGM and death by stoning.

Rashad Ali, a counter-extremism expert at the Institute for Strategic Dialogue, told the Citizen: “I think it is horrific the way people like Begg were treated in the war on terror, and how policies pursued for decades have done little to reduce institutional racism, as [Labour MP] David Lammy’s recent report shows.

“But groups like CAGE, which are apologists for Al-Qaeda affiliates and extremist clerics like Abu Qatada, provide fodder for far-right Islamophobes to demonise both Islam as a religion and also its adherents.”

Dave Rich of the Community Security Trust said: “MPAC UK are banned by the National Union of Students for anti-Semitism and their founder gave money to the holocaust denier David Irving. Nobody who claims to oppose racism should go anywhere near them.

“It was ridiculous that an organisation supposedly against racism invited them in the first place.”