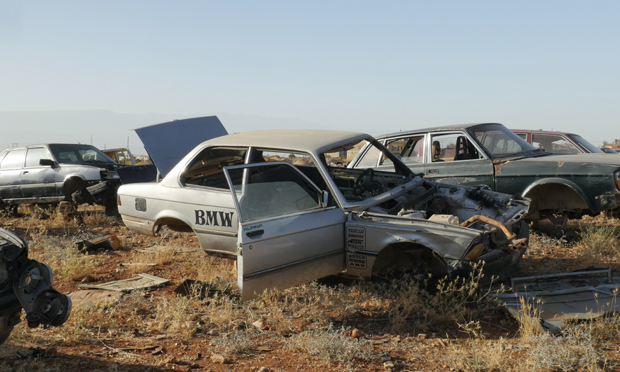 Maeve Brennan’s film The Drift (2017), now showing at the Chisenhale Gallery, is an engaging reflection on the role of objects, the lingering weight of histories, and the marks left by brief human lives. Filmed in the yawning landscapes of contemporary Lebanon, Brennan’s camera lingers on the satisfaction of physical reconstruction, and the depth of its subject’s passions.

The Drift orbits three characters: the aging guardian of ruined Roman temples in the Beqaa Valley, a young mechanic from a town renowned for its scrapyards, and a private collector and conservator of antiquities.

Whilst they never meet, they share a pronounced, often tender love for the inanimate objects they care for – whether the ruined stones and faded patterns of temple masonry, recovered vases and tombstones from long-forgotten graves, or a battered 1990s BMW.

These objects are their personal care and charge, and it is clear that each has surrendered a portion of his life to them. Each man serves and preserves the objects of their obsession for themselves and for others.

Lebanon here is presented as wide and old, occupied by people deeply aware of their position at a crossroads between the ancient and modern. And whilst direct references to the conflicts currently scarring the region are infrequent, they always remain somewhere behind the film’s meditation on the significance of history.

To watch it in London, particularly when reference is made to the international grey market of antiquities and relics flowing across the country’s borders, is a reaffirmation of our own position in relation to these men. The museums of London are full of the objects they care for, and the news full of images of young Arab men. Here though we see and hear stories of the lives behind the objects and image, and the influence the history of the landscape exerts. 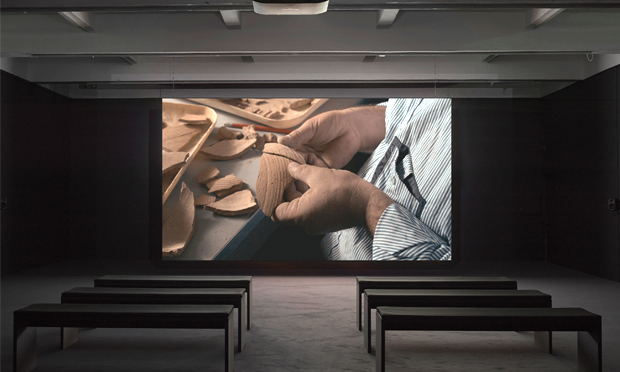 ‘The slow brush of the archaeologist’: an installation view of The Drift. Photograph: Andy Keate

Whilst there is a natural narrative established throughout, the visual pleasure of the cinematography and the careful composition of each of the film’s scenes are its primary pleasure. Long focus shots of tiny figures under a vast sky, tightly bound pans across pottery and machinery, and shots of lingering clouds of dust and smoke hanging in the air are beautifully executed.

The recurring motif of the reconstruction of an ancient vase is tightly focused on the slow brush of the archaeologist’s toothbrush, his testing of the fit of each piece, and the balance of the pottery in his hand. The replacement of a car door is romantically framed against a mountainside studded with once-homes and old stones.

Brennan’s film opens itself slowly, and is subtle in its message. But it pulls the viewer in, to a dusty, sun-parched corner of the world where history lies littered on the ground and landscapes once occupied by Roman and Phoenician merchants are now split by the roar of a car engine. Like the men in the film, your investment is rewarded with a reflective sense of what’s important, in the face of rolling time.

The Drift is on at Chisenhale Gallery until 4 June 2017