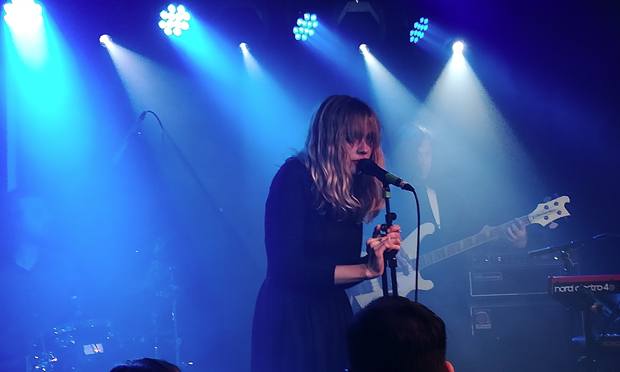 Alexandra Savior looks slightly nervous as she steps onto the stage in front of a sell out crowd at Oslo in Hackney. Her voice wavers as she sings “Babe”, the first line of opening song ‘Frankie’, perhaps confirming her apprehension.

The anxiety doesn’t last long however: Savior soon teases the audience pausing and raising an eyebrow as she utters the words “You’ve gotta make me come,” before finishing the line “back to your battle star”.

The assembled go crazy as ‘Frankie’ comes to a close, and a clearly boosted Savior casts a spell over the audience with the hypnotic ‘Bones’. The song shows exactly why Alex Turner was so keen to co-write Last Shadow Puppets song ‘Miracle Aligner’ with her, its catchy riff could quite easily slot on to a Shadow Puppets record.

As fourth song ‘Mirage’ begins, Savior slips into the guise of alter ego Anna-Marie Mirage, an artist who seems to be oppressed by a higher power: “We sing songs about, whatever the fuck they want”. The American brings her songs to life throughout the evening, both throwing her arms around and theatrically cowering down behind the mic, showing both the vulnerability and strength of the characters she sings about (this comes to a climax at the end of last song ‘Mystery Girl’ as Savior appears to breakdown, literally “Painting her teardrops on”.)

The delicate keys of ‘Girlie’ receive one of the biggest cheers of the evening, well known after the NME shared a video of Miss Savior performing it with a certain Mr Turner. While it’s clear to see Turner has added a few magic touches to Savior’s songs (just as she did to ‘Miracle Aligner’) his influence should not be overstated, Savior’s songs have a warm and personal feel about them that is unique to her.

Somewhat disappointingly however, a small group of lads decide to start singing Shadow Puppets songs during Savior’s performance, and even more disappointingly give her Stone Age cat calls that I highly doubt she wanted or needed. Most of the crowd give Savior the royal reception her mesmerising performance deserved however, treating her like a superstar.

The performance finishes after 40 minutes as Savior declares before the last song “I’m not gonna do an encore, I don’t wanna mess with your minds” and jokes “I don’t have any more songs”. Closer ‘Mystery Girl’ is an epic, with Savior acting out every word, her usually soft voice turning into a violent growl as she shouts “Don’t you try and calm me down”, as if the songs villain is in the room with us. The whole thing is presented with a tongue in cheek approach by Savior who growls “good night” in the same voice as a few seconds later.

The whole show was like a short but enjoyable dessert, Savior wouldn’t have needed to play more even if she could (debut album Belladonna of Sadness was played in full). The performance left a sweet and refreshing taste, and while the majority of current upcoming artists come across as overly pretentious and arrogant, Savior gives off a humble and genuine vibe.

She may not be the most accessible indie-pop artist, but the night’s somewhat edgier take on the songs of Belladonna of Sadness shows that she has all the makings of a musical shape shifter. If her next endeavour sounds completely unrecognisable to her current guise I wouldn’t be surprised, or doubt that she could pull it off.

All that remains to be said is that despite her sometimes featuring low on the music mag hype lists, Alexandra Savior is one of the most exciting upcoming artists of 2017.