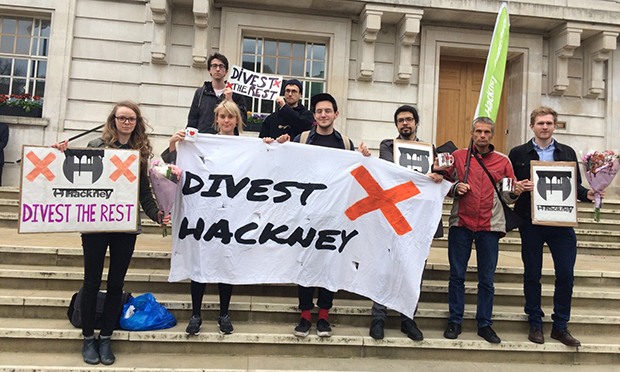 In January, the council agreed to divest 50 per cent of the fund’s stocks in oil, gas and coal companies by 2023.

The strategy was confirmed at a Pensions Committee meeting yesterday, but campaigners say it is “insufficient”.

Divest Hackney’s Camilla Zerr said: “We are asking the councillors sitting on the Hackney Council Pensions Committee to look the challenge of climate change in the face, do what is right for the planet and the people of Hackney, and commit to an investment strategy that truly aligns with the Paris Agreement by divesting 100 per cent of fossil fuel assets.

“Divesting 50 per cent of Hackney’s investments in oil, coal and gas companies is insufficient to realistically tackle the financial and environmental risks associated with investing in fossil fuels.

“To remind them of this, we offered the councillors on the Pensions Committee a bouquet of 42 flowers – half of which were covered in oil, representing the £21 million that Hackney Council continues to invest in wrecking the planet.”

The Town Hall’s pension fund has over £1.2 billion in assets, including investments in fossil fuel companies like BP, Royal Dutch Shell and Exxon Mobil.

Divest Hackney has been campaigning since 2015 to have the fund divest from these companies – a public petition has gathered nearly 2,000 signatures. 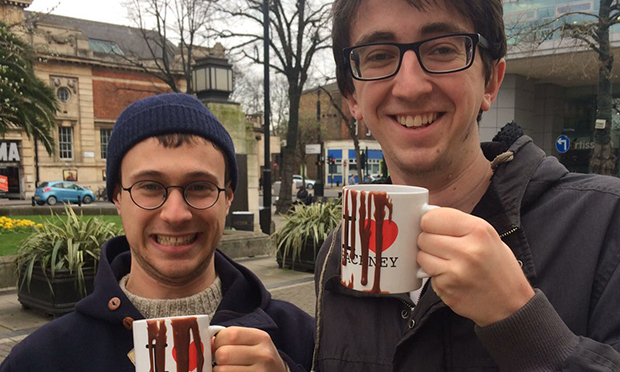 Reacting to the council’s decision to stick to 50 per cent divestment, campaigner Stine Wilhelmsen said: “We were extremely saddened to see the Pensions Committee fail to live up to their commitment to not only the residents of Hackney and their hard-working pension holders, but also the UK’s obligations under the Paris Agreement.

“Still, we’re refusing to give up and will continue to fight until Hackney Council does what’s right and divests the rest.”

Hackney Greens spokesman Samir Jeraj, who was at the protest, said: “The council’s £21 million in dirty investments could be put into dozens of alternatives that would benefit the people of Hackney. All it needs is the political will and courage. Hackney Green Party will be going into the next election, as we did in the last, committed to full divestment from fossil fuels.”

Last year, Waltham Forest and Southwark agreed to divest 100 per cent of their fossil fuel stocks.

But Cllr Robert Chapman, who chairs Hackney’s Pensions Committee, says full divestment now would “increase the overall risk to the fund”, adding: “Over the longer term, as fossil fuels reduce as a proportion of the economy, complete divestment may become a more realistic option.”

The council has invested £25m in a “Low Carbon Workplace” fund, which makes office buildings more energy efficient, and has agreed to invest in other green schemes when they become available.

Chapman added: “I understand the concerns about the links of the fund to global warming and we are committed to taking a very active approach in addressing these concerns, such as by working over the last two years to measure our carbon footprint.

“Moreover, we will continue to work with the London Collective Investment Vehicle to look at greener investment opportunities and support other boroughs with their green ambitions. This is while ensuring that our duty to balance investment risks and returns is met and that the fund can pay the benefits due to its members.

“We will also continue to work with Divest Hackney, other campaign groups and residents to listen and respond to any concerns that they may have. We welcome and value the engagement from all interested parties as we continue to push towards a greener Hackney Pension Fund.”