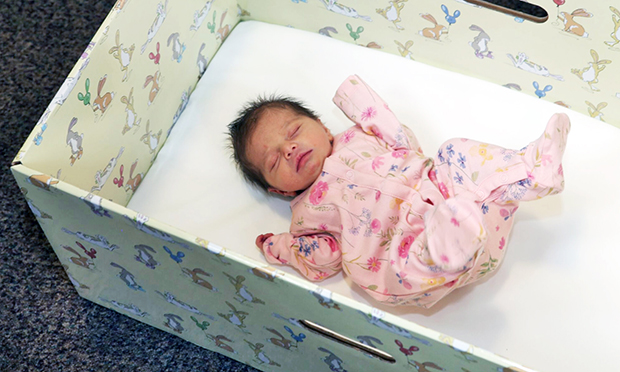 Cosy: these baby boxes will be dished out to new parents in Hackney. Photograph: Baby Box Co.

The long-standing Finnish tradition of handing out free baby products to new parents is coming to Hackney, the council has confirmed.

The Welcome Hackney Babies initiative is set to launch in August following the success of a Public Health pilot in 2015.

A Town Hall spokesman said: “The pilot was split into two parts – a binder of leaflets promoting health guidelines and local services, and a pack of products designed to support parents and the health of their baby, all supplied in a baby changing bag.

“The binder was distributed by health visitors and it included a voucher for parents to collect a baby pack from Daubeney Children’s centre.”

The council says it is in discussions with US business The Baby Box Co. to help roll out the scheme across the borough. The boxes are likely to contain “a firm mattress, waterproof cover and cotton sheets, breast pads, wipes and nappies”.

Parents will need to complete an online education course before they can apply for a free box. According to the council spokesman, the course will include videos about “safe sleep, breastfeeding, immunisations and smoking cessation”, amongst other things.

The Baby Box Co. has offered to provide both the online education resource and products for free to new Hackney parents.

Baby boxes originated over 75 years ago in Finland, where they were handed out with the aim of giving all children an equal chance at life.

Studies show the scheme has contributed to a decline in Finland’s infant mortality rate (IMR) – the number of deaths of infants under one year old per 1,000 live births – which dropped from 6.5 per cent in 1938 to 0.23 per cent in 2015.

Last year, the UK ranked 22nd out of all European countries with an IMR of 0.42 per cent.

First Minister Nicola Sturgeon announced in January that all new parents in Scotland would receive a free baby box from this summer.

Madlyn Ray-Jones, who heads up the parent-led Hackney Real Nappy Network, said: “I think the baby box is a wonderful initiative to welcome a new baby and to help prepare the family, both mentally and materially, for the new arrival.

“We would love to see a real nappy included in the box, or possibly a voucher for one. Families could also benefit from information about where to go to for support with breastfeeding, details about local sling libraries and the new Hackney Family Cycling Library, plus information about baby-led potty training.”

A task force, including midwives, health visitors and staff from both Public Health and the Hackney Learning Trust, has already been established to oversee the Welcome Hackney Babies initiative.

The council says more details about the scheme will be released closer to the launch.