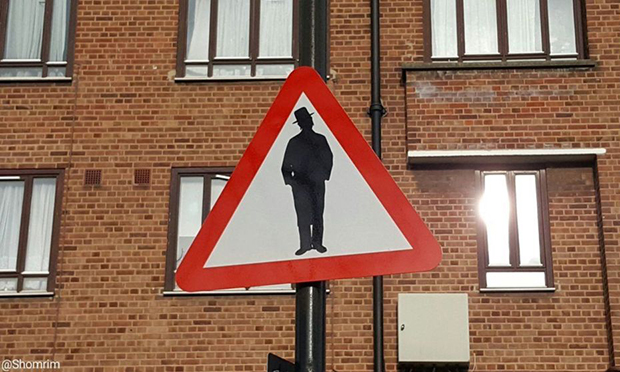 Handout photo taken with permission from the Twitter feed of @Shomrim of an anti-semitic “beware of Jews” road sign which has been reported to police after appearing on a lamppost in a north-London neighbourhood popular with orthodox Jews. Photograph: @Shomrim/PA Wire.

The man responsible for a red-triangle warning sign depicting the silhouette of an Orthodox Jewish man has apologised for causing offence after Shomrim, a Jewish neighbourhood watch group reported it as a hate crime.

According to The Guardian, the sign was one of several created and put up by Franck Allais, a freelance photographer.

He said it was part of an artistic project, which includes other signs such as of a woman pulling a shopping trolley.

Allais said the project was a comment on identity and that the sign in Stamford Hill was not intended an antisemitic statement.

He told The Guardian: “It was a project about crossing the road … how everyone is different, everyone has an identity. There is not only one sign in the street. I put more signs up in the street, but only this one got noticed. I am sorry for any offence caused.”

Allais said he had created the signs based on real people he saw crossing the road in the neighbourhood.

Police and Crime Commissioner for Surrey, David Munro, said: “As the national lead for Equalities, Diversity and Human Rights (EDHR), I take incidents of these kind very seriously.

“When this was brought to my attention, I was dismayed with the true lack of thought given by the artist for the distress this could cause to those of Jewish backgrounds.

“The work of Mr Allais is incredibly irresponsible and should be removed immediately. The location and connotations of the sign was undoubtedly going to cause alarm and offense and Mr Allais simply should have known better.

“By responding to this, I hope to reassure the public that offensive material such as this will not be tolerated.”

This article was updated at 17:00 on Friday 17 March 2017 to include a comment from David Munro, Police and Crime Commissioner for Surrey.