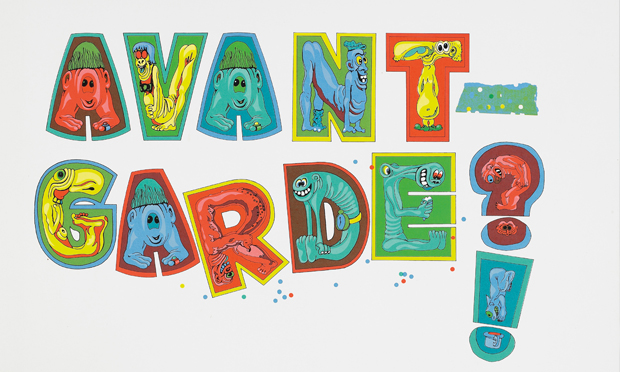 I haven’t looked at an Eduardo Paolozzi since I was 16, and I plagiarised him – obviously, unoriginally, unashamedly – in my GCSE art exam. 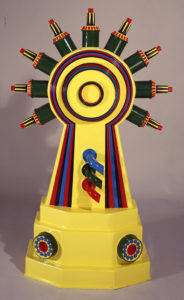 Diana as an Engine I (1963–6) by Eduardo Paolozzi. Courtesy the British Council Collection. © Trustees of the Paolozzi Foundation, licensed by
DACS

Seven years have passed since then, and the major retrospective at the Whitechapel Gallery felt like a good reason to break the fast. After all, he’s dead now, and it’s too late for them to take my A* away.

The exhibition is enormous, really. It spans five decades, two floors, and over 250 works. I thought it would be fun to keep count of the different media featured: the concrete of the artist’s early brutalist sculptures, the magazine cut-outs of his collages, the fabric and fashion, the screen-prints, the aluminium, the bronze, the wood. I gave up in the second room; partly because I had run out of fingers but really because there is almost too much to look at.

In spite of the vast quantity of work, the exhibition manages to hit just the right amount of overwhelming. Each room is cleverly laid out: work is placed at different levels (try not to trip over some of the smaller sculptures) and tables and installations force you to weave your way through the collection just as Paolozzi weaved his way through form and style. Even so, there is still ample space to stand back and to take it all in.

And the images really are worth pausing for. If you want easy viewing, there is enough colour, clothing, texture and playfulness to make for an entertaining hour. If you want to think, and be challenged, then there is as much irreverence and political critique as you would expect from an artist with such diverse interests and obsessions. There is big and small, light and dark, and there is all of this all at the same time. 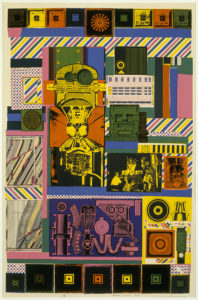 Conjectures to Identity (1963–64) by Eduardo Paolozzi. Courtesy the British Council Collection © Trustees of the Paolozzi Foundation, licensed by DACS

The Whitechapel Gallery itself is beautiful, and warm, and welcoming. Martin Kershaw’s Hero As Riddle album, inspired by Paolozzi’s work, trickles through the gallery from the upstairs room. The little explanatory panels that detail the artist’s evolution thankfully elucidate rather than enforce a reading.

Perhaps it’s odd to see an artist so determinedly anti-establishment enshrined in a gallery that charges you to pass through its doors, but most likely I’m just overthinking it. I owe this artist my A*, and pop art owes him a lot more. I didn’t pay for my entrance to the exhibition (I feel like Paolozzi would have approved), but I would have paid, and happily. I think you should too.