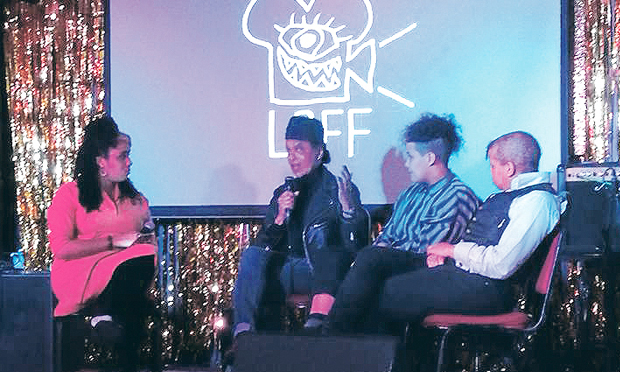 The trio kicked off discussion following a screening of a powerful live set by pioneering DC punk band Bad Brains at CBGBs, unearthed recently from 1982.

The panel talked over their feelings and experiences as women of colour in the music world, specifically the punk and DIY music scene, and how they approached and dealt with the different circumstances of those experiences: offering stories and insights.

Whilst they were discussing a world where it is all too common for there to be virtually no black representation, on stage or in the crowd, the tone of the evening was upbeat and convivial.

Smith spoke of the influence that fellow panellist Black had on her childhood “because it was a black woman, wearing really cool clothes, and being out there and giving it!” Aggs told of dispiriting incidents when people asked “what kind of music do you play? Is it hip-hop?” when spotting her on the street with a guitar, but also of the motivating factor of being different in a scene: “If there’s no one like me doing this – I need to do this.”

Following moderator Chardine Taylor-Stone’s band Big Joanie’s visceral closing performance, attendees reflected on the evening. Moema Meade, herself a touring member of Sacred Paws amongst a myriad of other musical projects, called it “incredibly inspiring and amazing” – and perhaps, hopefully, it will have launched a few new future acts.