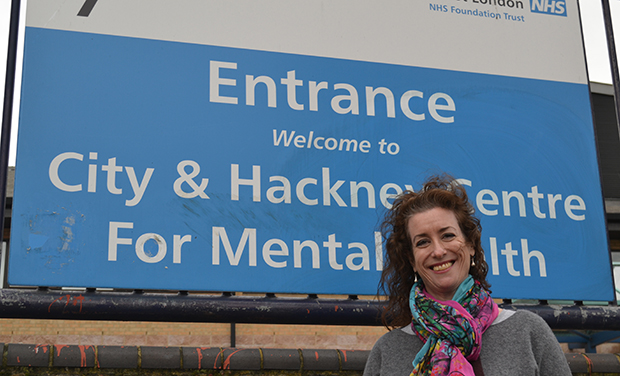 A nurse who works in the NHS at a senior level has praised the “amazing, phenomenal” care she received as an inpatient for 12 weeks at the City and Hackney Centre for Mental Health during a crippling bout of depression which struck her late last year.

Mandy Stevens, 47, who lives in Stoke Newington, is a former NHS director of mental health who has worked in this field of healthcare for nearly three decades, having worked her way up from being a hospital cleaner.

She penned an emotional LinkedIn post about her experiences which went viral and has been viewed by more than a million people.

In it she wrote: “As I have worked in mental health services for 29 years, one would think I would be immune to mental illness. I am a registered mental health nurse with 15 years experience as a clinician and latterly 14 years as a manager and then director. But there is no immunity; mental illness can come out of nowhere and affect anyone at any time.”

She praised fellow nurses who had helped her “get her smile back” after mental illness “ripped the heart and soul out of me”, stating: “I have experienced this outstanding care in my hour of need and it has been truly remarkable.”

After being officially discharged on 13 January, she said she wanted to share her story to help break the stigma around mental health conditions.

Asked what advice she would offer to anyone suffering from depression, she told the Hackney Citizen: “The first thing is, for people who are feeling sad or feeling ill, reach out.

“The second thing is self care, so looking after yourself, making sure you’re eating well, you’re sleeping, you’re not stressed at work, your relationships are ok, your finances… And if that doesn’t work, go to your GP and your GP can then start referring you on or advising you or prescribing antidepressants.”

She said she had been pleasantly surprised about the quality of service at City and Hackney Centre for Mental Health, which is run by East London NHS Foundation Trust and was recently rated “Outstanding” by the health watchdog.

Stevens said there was a “postcode lottery” in healthcare nationwide and not all healthcare trusts had the resources – or the beds – available to provide such a high standard of care.

A keen biker who enjoys travelling and helps out at an orphanage in Ghana, she said she had suffered from depression before, but never as badly as when the illness flared up late last year.

Mental health problems are said to affect one in every four people at some point in their lives.

City and Hackney Centre for Mental Health is based in the grounds of Homerton Hospital.