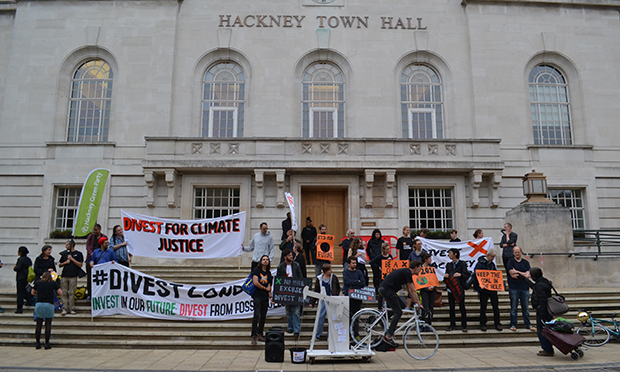 Banners unfurled at a pensions committee meeting last year. The council has now said it will reduce its fund’s exposure to CO2 emissions by 50 per cent. Will this be enough for campaigners?

Hackney Council says environmental damage caused by its pension fund’s investments will effectively be slashed in half within six years.

The move may not go far enough to placate environmental campaigners who had demanded some £42 million worth of investments in coal, gas and crude oil extraction be dumped to help combat the potential extinction of the human race.

But the pensions committee, which oversees the fund for serving and retired local authority employees, could have faced a civil lawsuit from unions if it acted “politically”, council insiders said.

Instead they have used a “stranded assets” argument based on predicted future financial risks associated with fossil fuel investments.

This is predicated on the outcome of the Paris Agreement on dealing with climate change – the deal now threatened by President Trump, whose rise to power further complicates matters.

Critics will no doubt claim the decision by the council is too little, too late and represents “death by bureaucracy”.

Challenged by the Hackney Citizen about whether anyone would care about their pensions once they were swamped by sea water or fried by rising temperatures, chair of the committee Councillor Robert Chapman said he believed the decision was the best arrangement possible under current circumstances.

He added it was a major step towards making the fund fossil fuel free and said he could “foresee a time when our fund will have no fossil fuel investments” – though he conceded this could be a long way off and that he “could be dead by then”.

The decision does not mean the contentious stocks and shares comprising around six per cent of total investments by the fund will necessarily be dumped or changed into greener types of investments, as campaigners had called for.

Rather, it effectively means the overall impact of the fund’s investments in terms of future CO2 emissions from industry generally will be halved.

Council officers were quick to stress that all the companies which pension funds invest in would be likely to have a carbon footprint of one size or another.

They explained they had commissioned a specialist consultancy to assess the future CO2 impact of the fund’s investments overall, rather than merely focussing coal, oil and gas extraction giants.

To achieve the 50 per cent reduction target, fund managers will be given a new code stipulating how the money can be used.

The council stressed it was seeking to “strike a balance”. It pointed out that eliminating the fund’s exposure to fossil fuels was not sensible as it would carry serious financial risks.

A council spokesperson said: “Fossil fuels have historically been a key component of the UK and global economy, supporting industry, utilities and transport.

“Failing to invest in this sector would therefore have represented a significant limitation on the fund’s investment options, leaving it open to the risks of a highly concentrated investment portfolio.

“Whilst awareness of climate change and the dangers of fossil fuels has been building since the 1980s, there has until recent years been no material risk to the financial position of fossil fuel companies. We recognise that this situation has changed, and that fossil fuel investment also carries risks.

“The need for and likelihood of policy action on fossil fuel consumption does now pose a threat to the business models of these companies, and the fund is reacting accordingly.”

The Town Hall says total fees paid to the fund managers varies “according to performance”. In the last financial year total investment manager funds amounted to £3.844million – around 0.33 per cent of the value of the assets being managed.

The Hackney Citizen has asked campaign group Divest Hackney for their view on last night’s decision and is awaiting a reply.

Hackney Green Party has released the following response to the council’s decision:

“Whilst we applaud the council’s pensions committee for having taken this issue so seriously over the last two years, we are deeply frustrated by the outcome of their deliberations.

“To avoid catastrophic global warming, we know that almost all the known reserves of fossil fuels must remain in the ground. To invest in oil, coal and gas is to profit from the ruin of our planet.

“Indeed, climate change is already affecting the lives of millions of people across the world, and, in the long run, threatens to undermine global economic and political stability.

“If Hackney is to have any credibility on this issue, it must take a stronger stance – it should divest from the top 200 oil, coal and companies by 2022. After all the work it has done, it is astounding that it has fallen at the final hurdle.

“Instead of dithering, they could adopt a comprehensive approach that could add credibility and rigour to the decisions of Waltham Forest and Southwark south of the river – as well as the hundreds of institutions across the world, including the British Medical Association, The Guardian, the Rockefeller Foundation and others.”