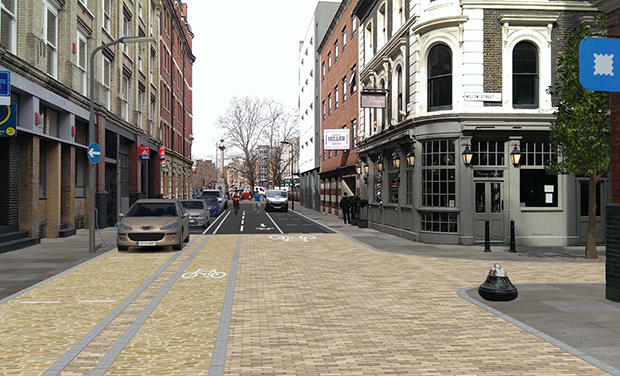 A CGI image of how one of the streets near Old Street could look under the project. Image: Hackney Council

Traditional, non-electric cars are set to be banned from parking or loading in parts of Shoreditch in a bid to try and detoxify its air.

Hackney is being allocated around £1 million from City Hall and Transport for London to create what has been branded a “neighbourhood of the future” in which green technology would be utilised to cut life-shortening emissions and charging points for e-cars installed.

The idea is that motorists will be prodded into making the switch to more environmentally friendly vehicles.

The council says the money will be used to create “electric streets” – with a concentration of charging points and electric vehicle-only parking and loading points – in part of the borough close to the City which borders Tower Hamlets and Islington. The area, near to Old Street, is one of the more polluted areas of Hackney.

Cllr Feryal Demirci, Hackney Council’s transport chief, said: “We’ll only reduce pollution if boroughs work together, so we’re delighted to receive funding to build on our work with Islington and Tower Hamlets to improve air quality around Shoreditch and the City Fringe.

“We want to transform the area into an example of everything that London should be striving for, with people friendly streets, prioritising low emissions transport and most importantly, clean air.”

London has some of the worst air quality in the UK, and in many parts of the city legal limits designed to protect people’s health are not being met.

Brixton Road this month had the dubious honour of being named the first in the capital to breach annual air pollution limits in 2017.

According to readings from the air quality monitoring station in Old Street, emissions there have so far stayed below legal limits, however.