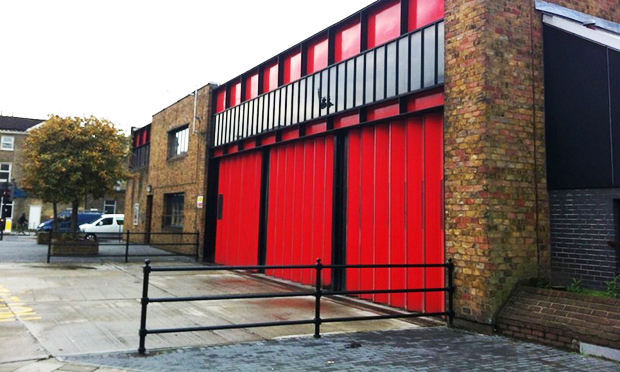 Due for demolition: Kingsland Fire Station

The closed Kingsland Fire Station will be demolished and the land it sits on will be redeveloped with no affordable housing – despite warnings that a “sizeable profit” stands to be raked in by stakeholders including wealthy landlord the Benyon Estate.

The firm is in charge of part of Conservative MP Richard Benyon’s family’s property portfolio. It is managed by the MP’s brother Edward Benyon and comprises some 300 properties in De Beauvoir Town.

The fire station was closed as part of cost cutting measures by Boris Johnson during his time as Mayor of London – a decision that sparked stiff opposition from Labour and has provided an ominous backdrop to wrangling over the site’s future and outrage that it could now be used to generate private profit.

In a letter about the scheme, passed last night by the planning committee, Labour councillor James Peters wrote to Labour-controlled Hackney Council warning that the plans were “a travesty, a mockery of the council’s policies and an insult to those people throughout the borough”.

Under the proposals, which were unanimously approved by members of the planning committee last night, 68 dwellings will be constructed and sold at market rate.

A primary school with places for up to 350 pupils will also be built and will be operated by Hackney New School.

When the plans first came to light, MP Meg Hillier wrote to Education Secretary Justine Greening to ask her to consider the need for affordable homes for teachers.

“On this site, it [the Education Funding Agency] has a golden opportunity to deliver both a school and homes for teachers,” she wrote.

A spokesperson for the Education Funding Agency, which owns the land, said project costs would be published after the school is built, and a Hackney Council spokesperson said the planning application had been approved subject to Section 106 agreement being finalised.

The applicants will now contribute £1.5 million to build affordable housing elsewhere in the Hackney, but there will be none on the site, the council has confirmed.

Cllr Peters today told the Hackney Citizen: “They tell us that this is coming out of their profit, which falls from industry-standard 15-20 per cent to 11 per cent.

“For the viability assessment the council didn’t use the £16 million paid by the Education Funding Agency but the council’s own £5.3 million valuation. EFA clearly massively overpaid.”

Commenting on the planning approval, Edward Benyon of the Benyon Estate said: “This is excellent news for the whole community and we are very pleased to be part of this very important project which will be key to giving our young people a great start in life.

“The Benyon Estate’s links with Hackney date back to 1640, during which time there has been a long history of serving and supporting this community, particularly providing homes and buildings for people to live and work.

“One of the biggest challenges we face as a community today is putting the right infrastructure in place for future generations and a key priority is helping to educate our young people.”

Speaking about the scheme last year, he added: “Under the terms of the partnership, any profit The Benyon Estate can make is strictly limited and will be used to support our ongoing development and renovation projects in the area.”

Hackney New School chairman Andreas Wesemann has said the development is not a profit making exercise for the school, adding: “We are running a school, we are not developers.”

In a report to the planning committee council officers said the scheme was “considered to have a positive impact on its surroundings” and would “create an outstanding landmark and gateway along Kingsland Road”.

They added: “Locally, the scheme would reinforce this local node around Haggerston Overground station and the diverse mix of uses at this junction.

“The harm to neighbouring conservation areas (De Beauvoir) is considered limited and less than substantial.

“The scheme is considered having no harm to the setting of the nearby Grade II listed crescent of terraced houses.”

This article was updated at 11:38 on Friday 13 January 2017, to add an updated statement from Edward Benyon.

← Chesham Arms is London’s top pub, says quality beer group established by ‘disgruntled’ drinkersThe Barbican: who lives on an estate like this? →