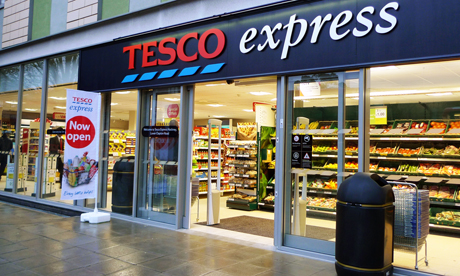 Tesco Express in Lower Clapton Road. The grocer has suggested the planning application concerning Chatsworth Road is nothing to do with it. Photo: Emily Webber

Fans of a thriving shopping street fear Tesco may be behind ambiguous plans for a new “metro-style” store – but the supermarket giant has stumped planning sleuths by indicating that the scheme is not its doing.

An application to change 21-23 Chatsworth Road into a retail unit with 359 sq metres of internal floorspace will face resistance from ward councillors, residents and traders angry about the faceless nature of the scheme and potential impact on local businesses.

In a bundle of documents submitted to Hackney Council’s planning department the applicant is listed as “Mr L Albonico” and the agent as a Sussex-based company called RDjW Architects Ltd.

But anyone wanting to identify the actual operator of the proposed new store will be left none the wiser because this is not specified in the documents.

Councillor Ian Rathbone, who represents Lea Bridge ward, said he and colleagues Cllr Margaret Gordon and Cllr Deniz Oguzkanli were against the plans and spoke out over secrecy surrounding the scheme.

Cllr Rathbone told the Hackney Citizen: “If it was going to be an independent supermarket, they wouldn’t be hiding anything.

“We are suspicious of any development that is this large, and we know that the global supermarkets have been eyeing up Chatsworth Road because of the success of the market there.

“The way this is looking, from our previous experience with Tesco on Lower Clapton Road and our dealings with them elsewhere, this would be the right sort of premises for them. We don’t want another global supermarket – and we don’t need it.”

Proponents of the Tesco theory point to the proposed design of the new store, which appears to mirror that of many high street branches of the major supermarket brands.

It would contain a freight lift, in-store bakery, storage area and space for several aisles filled with groceries.

A spokesman for Tesco poured cold water on speculation that the company was pushing the scheme, however, saying the Chatsworth Road address was “not a site that we are familiar with”. But he refused to say anything further about the matter.

If not a Tesco, the store could potentially be operated by Sainsbury’s or the Co-op, or could in theory be an independent supermarket.

Ill feeling towards Tesco runs high in some quarters following the arrival in 2010 of one of its “Express” stores in Lower Clapton Road – against the wishes of residents who campaigned against this outcome.

Damian Patchell, chairman of the Chatsworth Road Traders’ and Residents’ Association, said the prospect of a branch of any big supermarket brand on the high street would place longstanding convenience stores there under “extreme pressure”.

“Due to the size of the proposed development, I’d put good money on it being a big supermarket’s metro-type store,” he said.

He added: “In general terms there isn’t an issue…but Chatsworth Road is a small local high street, and the traffic impact could be quite large due to multiple deliveries and vehicles stopping off to use it.”

Tesco’s founder Jack Cohen started his business in Hackney when he began trading from a market stall in Well Street shortly after the end of the First World War.

The Hackney Citizen contacted RDjW Architects Ltd to seek clarification about the planning application for 21-23 Chatsworth Road, which is currently a betting shop, and is waiting to hear back from them.

Update at 4.24pm on Wednesday January 4:

Lawrence Albonico, the co-owner of 21-23 Chatsworth Road, has told the Hackney Citizen that the proposed new retail unit is “not going to be a Tesco”. He explained that he is hoping to improve the flats upstairs and get his change of use application through, at which point the unit will be advertised via an agent to find a suitable occupant.

Mr Albonico, who also owns several other properties, said: “I’ve got a few ideas of what I want it to be but nothing concrete. I’m ok with going with food but I don’t want a Tesco in there. I wouldn’t do that. I don’t really like Tesco.”

He acknowledged that “whatever business gets in there is going to be in competition with somebody”, however.

On the issue of a potential increase in traffic resulting from deliveries, he said there were already several other grocery stores on Chatsworth Road, some in units larger than the 21-23 premises.