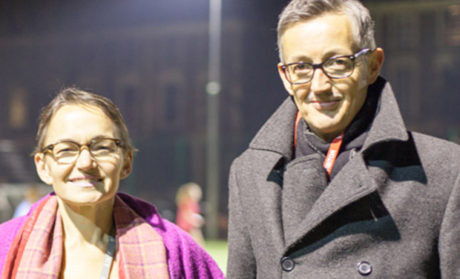 The chair of governors at Stoke Newington School has been awarded the OBE.

Crispin Truman is also chief executive of the Churches Conservation Trust, where he has worked for the past 13 years regenerating some of the country’s most historic churches.

His previous jobs included heading up mental health charity Revolving Doors Agency, and he has been involved in several other London and nationwide charities, including The Heritage Alliance, Rethink Mental Illness and The Hackney Building Exploratory.

In addition, he is a former chair of the London Cycling Campaign.

Truman has been chair of governors at Stoke Newington School for the past three years and a governor at the school for seven.

Annie Gammon, the school’s headteacher, said: “I, the governing body and all of the school community would like to congratulate Crispin.”

Others with local links who were recognised in the New Year’s Honours list were Clive Rowe, who has played the Dame in successive pantomime productions at the Hackney Empire, and Sharon D Clarke, who starred in its most recent panto, Sleeping Beauty. They were awarded the MBE.

And Chaya Spitz, the chief executive of the Stamford Hill-based Interlink Foundation, was awarded the OBE.