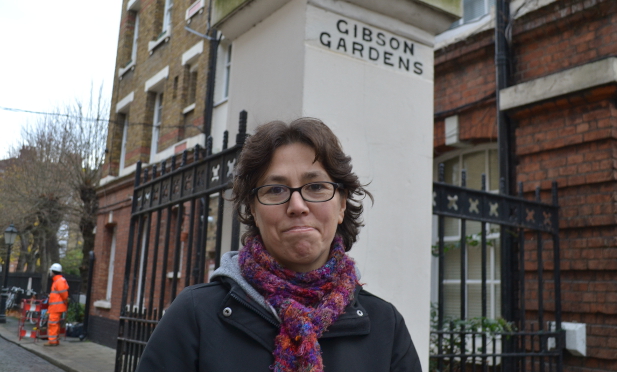 Quick thinking neighbours on a private estate in Stoke Newington grabbed panels of wood, pallets, bags of cement, potted plants, traffic cones, chairs and anything else they could get their hands on to hastily erect barricades which prevented the deluge from a burst water main from flooding homes.

Trinidad Prieto, who lives in one of the historic tenement buildings on the Gibson Gardens estate close to the junction between Northwold Road and Stoke Newington High Street told of the dramatic moment on Sunday when she and fellow residents sprung into action while emergency service workers who attended “just stood there”.

She said: “At around 12 noon there was a bang. The water main burst and all the water came flowing down here. In five minutes the water had reached up to about ankle height. It was like a river. We grabbed anything we could to make a barricade to try and stop the water coming in.

“All the flats here were saved from flooding, but the basements of many of businesses on Northwold Road have been destroyed.” 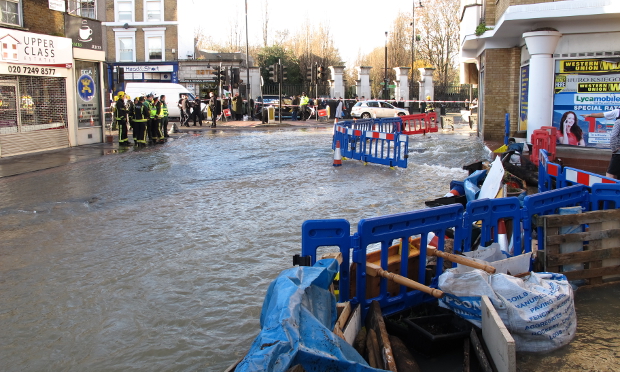 Flood defences: The homemade barricade that helped stem the deluge

She added: “It was quite scary, all this water coming flooding in. We saved the insurance company thousands of pounds, but what I am pissed off about is that it was left to us to do this. This was an action we had to take on our own.”

She believes the incident could have been prevented, had Thames Water acted earlier to fix a problem with a pipe which several residents said they alerted the utility company to around a week earlier.

“We were calling them and saying, there’s water coming out, why don’t you do anything,” Prieto said.

Her husband Gwilym Lloyd wrote that all ground floor flats in Gibson Gardens were saved “and a possible insurance payment of tens or hundreds of thousands of pounds was averted” thanks to “a small handful of residents” taking matters into their own hands in the face of what he described as general “paralysis” about the unfolding disaster.

Nina Holland, who lives in a ground floor flat in Gibson Gardens, was not at home to witness the drama but heard about it from afar and feared for the safety of her dog, Daphne, who was alone in the flat.

“I was really worried,” she said. “I was absolutely frantic, to be honest. I was worried about the dog, and being away was probably worse than being here yesterday because I just didn’t know what to expect to be coming back to.”

She added: “We’re just so grateful we’ve got such smart and practical neighbours.”

Holland was one of several residents kept informed with real time updates via a Facebook group for inhabitants of Gibson Gardens. 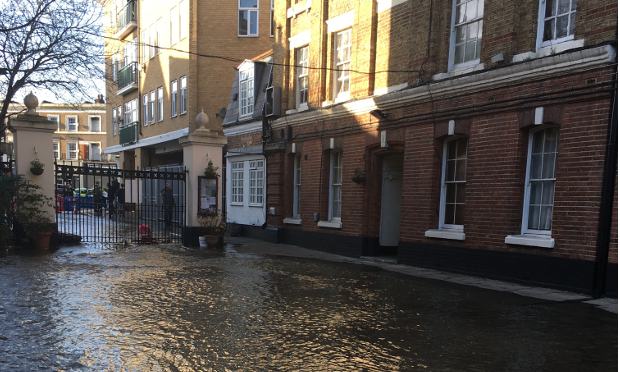 Mehmet Doldur, who works in the Booth’s Corner cafe close to where the water main burst, said he first noticed water slowly bubbling up from the pipe a week before Sunday’s chaos.

“At around 10.30am on Sunday, the water started coming faster,” he said. “Suddenly it popped. Minutes later, the police came.”

Though it has now mostly drained away, the affected streets remain sodden and covered in a film of dirty silt and mud. Shutters were down this morning on most businesses along the shopping parade at the western end of Northwold Road.

Affected stretches of road are closed and are expected to remain so at least until tomorrow.

Thames Water director Bob Collington said: “It has been an extremely difficult week and, having visited and spoken to a number of those impacted, I am personally devastated for those customers who have suffered flooding so close to Christmas.

“We are doing everything we can to help them and will make sure they are not left out of pocket for what has happened.

“The bursts are a clear reminder that we need to keep investing in our ageing and sometimes fragile network, with many pipes in London well over one hundred years’ old.

“I have started a full investigation into recent events to understand what has gone wrong and, as a top priority, will look at every single way possible to reduce the risk of any further disruption.”

Thames Water said the affected stretch of pipe was laid in 1868.

Sunday’s incident is just the latest in a series of similar occurrences in London, including in Upper Street, Islington, which was flooded early last week. Buses in the area remain on diversion in the area because of this.

At least one local business owner in Stoke Newington has threatened to sue Thames Water owing to loss of trade owing to Sunday’s deluge.