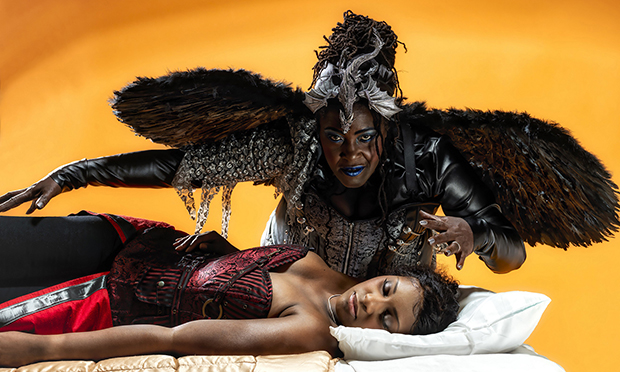 The panto geek in me raised an eyebrow when the cast list was announced for Sleeping Beauty at Hackney Empire this year.

“Sharon D. Clarke… is playing the baddie?” I exclaimed internally, thinking back to Clarke’s masterful turn as the Good Witch Charity in 2014.

But I should have dispelled any doubts that someone habitually on the side of ‘good’ might struggle to summon the requisite badness to take on the role of pantomime villain. Afterall, such transformations happen on Eastenders on an almost week-by-week basis.

“Such fun!” Sharon booms to me when we speak over the phone. “Whether good or bad I just like being magical, but there’s a certain catharsis about being the baddie and being able to tell the audience off and take the boos. It’s a different kind of power and I really love it!”

Set in Hackneytonia (not to be confused with Hackneydale – that was last year), the show sees malevolent fairy Carabosse (Clarke) cast an evil spell which looks like changing Princess Tahlia’s life forever.

Clarke, who has been in several big West End productions and won an Olivier Award in 2014 for her role in The Amen Corner at the National, says one of the strengths of the Empire’s pantomimes is its relatively stable cast.

“Susie’s knows me very well [an understatement – the pair wed on the Empire stage] and so she’s written the part with me in mind,” Clarke says of her character.

“She’s funny, she’s scary, she’s sexy and she’s fun. She loves what she does. Other people might not like it but as far as she’s concerned life is good!”

Now 50, Clarke is a veteran of the panto game. She grew up in Tottenham and was sent to the Ivy Travers Dance School as a child, first treading the boards in panto aged six.

“It was Babes in the Wood and I was one of the babes, and then when I was about 13 I played Baron Hardup in Cinderella,” she says.

Clarke speaks with passion about the traditions of pantomime how it can be a vehicle for getting young people interested in theatre.

“It’s often children’s first experience of theatre so you want it to be good because if it isn’t you put them of then you could put them off theatre for life,” she says.

Clarke describes the Empire as a “second home”, somewhere she has performed for 16 years and the Empire pantomime is obviously a source of considerable pride to her.

“The calibre of people in the show is just fantastic, she says. “These are people who know their craft, there’s no one because they’re off the telly and that will put bums on seats – the panto itself because of its reputation puts bums on seats.”

For the Empire, panto season is the busiest time of year. But among actors and theatre-goers there can still be a certain sniffiness about pantomimes.

“Some people don’t see it as real theatre because it’s so big and colourful. It’s a cartoon on stage but cartoons can be wonderful vehicles for teaching children morals and empathy,” Clarke says.

“The audience becomes the last member of your cast and you depend on them to get you through. There’s a joy in performing in that way that you just don’t get anywhere else.”