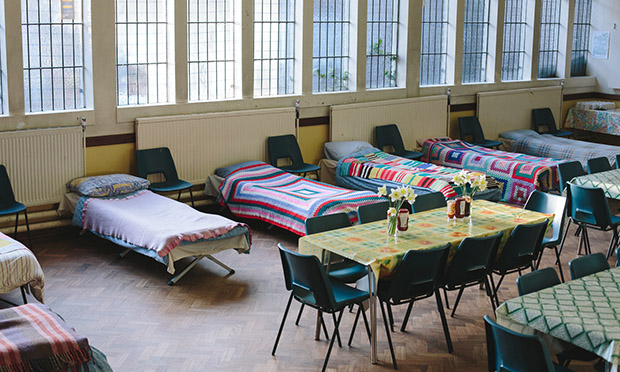 As days grow shorter and nights colder, the Hackney Winter Night Shelter is again supplying beds and warm food to the borough’s homeless. The charity gives 15 beds each night to the most vulnerable, but demand is rising.

According to figures from the Combined Homelessness and Information Network, in the last five years there has been an increase in homelessness of over 200 per cent locally. Figures for 2014-15 show 155 people were believed to be homeless in Hackney.

Many believe the numbers are undercounted, and the council this week approved a new homelessness strategy in recognition of what is a growing problem.

At tonight’s full council meeting councillor Kam Adams will ask the mayor’s adviser on homelessness for the latest stats for Hackney “in light of the recent official figures that show homelessness has risen to the highest level for nearly a decade”.

The night shelter, which operates seasonally, is meant to be a safe place where its users, or ‘guests’, can take refuge from the harsh winter nights. The charity, which was started in 1993, employs two full time employees who assess applicants. They are referred by agencies in the area.

Demand for places is so high that only the most vulnerable are taken in. They are offered a place to sleep for 28 nights.

Since this year’s opening, in November, the shelter has already received 100 applications and has accommodated 30 guests.

In previous years guests were offered a place for the whole winter. But since last year the charity has decided to align its policies with those of other service providers and has introduced a cap.

Niul Dillon Hatcher, a trustee, explains the new policy is a “double sided coin”, adding: “It means we offer a temporary stay to a wider group of guests, but people don’t get to stay so long. They get to have a stable period. And with luck, it will help find somewhere more permanent.”

‘One or two paycheques away from the street’

The shelter’s vision is to provide a route out of homelessness. This year it has already found four people more permanent housing. One of them, Alan (not his real name), 60, a former builder, says his experience is not uncommon.

“Thousands of people are only one or two paycheques away from being on the street,” he said. “It happens all the time. The only difference is that some people have family or parents to support them. If you don’t have that, you’re on the street.”

He chose a career change, and while he saved up, after an unexpectedly high tax bill he soon found himself in dire circumstances.

He adds: “I’d started working on my new career and had enough to live on for a few months. I thought I had it all worked out. Everything was going well. Then my tax bill came in. It was much higher than I expected – £3,500 – and I was back to square one.”

His landlord was unsympathetic, and when he fell behind on his rent for two weeks, his pleas fell on deaf ears.

He was homeless for six months, and after over staying at his friends, he found himself on the street. Buying a tent and living on a campsite soon became unaffordable, so he slept in a forest before being given refuge at the shelter, which he credits for turning his life around. He was able to start working again and soon was able to afford the deposit for a flat.

Dillon Hatcher also warns that the benefits cap will make the shelter’s job a lot harder. He adds: “The benefits cap will have an important factor how our guests will be able to move on”. He believes it is conceivable that former guests that have moved into more permanent accommodation will become homeless again.

While the shelter has sufficient volunteers helping run the dinner service, it needs volunteers to stay the night and others who can help run the breakfast service.

Dillon Hatcher explains the experience: “Four volunteers, two men and two women, arrive at 10pm and between them decide who is going to sleep early, and who is going to sleep late. Early is from 22:30 – 3:00 and late from 3:00 – 6:30. The eight hour shift is easily manageable, it’s a very calm shift. The guests are very grateful to have a bed.”

The breakfast shift begins at 6:00-8:30 and involves serving food and clearing up.

For anyone interested in volunteering in other ways, or outside of the winter season, there are plenty of opportunities.

The charity is currently overhauling its funding structure and is looking for creatives and entrepreneurs in Hackney. For more information visit hwns.org.uk