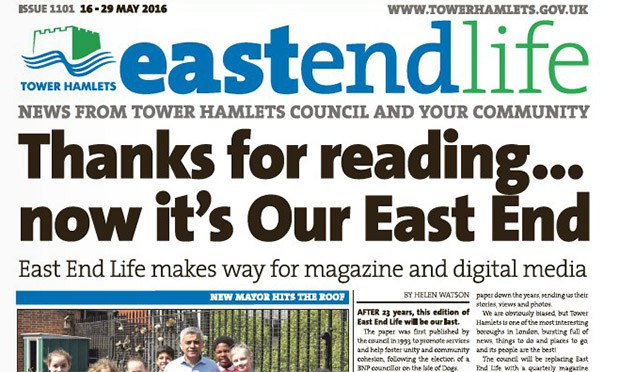 Hackney Council is making out that it has no alternative but to publish its taxpayer funded freesheet fortnightly and to compete with local independent newspapers like the Hackney Citizen for advertising – but this bizarre set-up is virtually without parallel in London, and no one is forcing the Town Hall to act in this way.

He has pointed out to the council’s communications supremo that in no other London borough – bar Hillingdon, Enfield, Lambeth, Newham and Waltham Forest – does a local newspaper have to compete with the council for ads.

Such an arrangement was, Magnum said, akin to if the publicly funded BBC decided to compete for advertising with commercially-funded TV channels.

The council claims that if it were to cease pursuing advertisers for print and online slots it would cost it between £100,000 and £150,000 each year.

These calculations are understood to be based on the current fortnightly publication schedule of Hackney Today.

However, Ted Jeory, the author of the Trial by Jeory blog covering neighbouring Tower Hamlets, said the council was free to take a different course of action.

He told the Hackney Citizen: “Hackney Today, which is well produced and informative, doesn’t appear to be in the same league for egregiousness as the former weekly East End Life was in Tower Hamlets, but there are some pretty concerning parallels.

“The government-appointed commissioners forced the closure of East End Life because it didn’t comply with the Local Government Code of Practice, and in part crowded out advertising from commercial local papers.

Jeory, who is also investigations editor at The Independent, added: “Hackney Today seems to display the same attitude to transparency and accuracy on costs as the old East End Life.

“On page 2 of every edition, it says: ‘It [Hackney Today] has a print run of 108,000 copies and is delivered free to every home and business in the borough.’

“It’s simply not true that it is distributed free. The council (i.e. taxpayers, its readers) pays Trinity Mirror to print the paper and a distributor to deliver these 108,000 copies.

“Let’s challenge Hackney Council to state how much it pays for these services. In fact, in the interests of transparency, let’s challenge the council to print in every copy how much the paper does cost to run. Let’s have a full breakdown of costs in every paper.”

According to a response to a Freedom of Information request, the cost of distributing Hackney Today is £149,979 per year. The annual print costs total £123,089.

The freesheet has two full time staff but stories are always written by members of the council’s communications team.

Jeory added: “Page 2 of Hackney Today also says this: ‘It is published fortnightly in order to carry statutory advertising, such as planning and traffic notices, which is cheaper for the taxpayer than using another local paper.’

“Let’s challenge the council to prove this. Has the council ever sought a quote from the Hackney Citizen for the bulk advertising contract for statutory notices?”

“It also claims this: ‘The law does not allow for statutory notices to be published solely online or in a less frequent publication.’

“Well, how is Tower Hamlets now managing to survive with a quarterly publication?

“I never thought I’d say it, but Tower Hamlets is leading the way.”

Currently the Hackney Citizen does not publish often enough to take statutory notices. However, the frequency with which it is published could potentially change to allow such notices to be carried on its pages at an affordable rate.

The Hackney Citizen is awaiting a response from Philip Glanville to the issues raised in our editor’s letter to him.