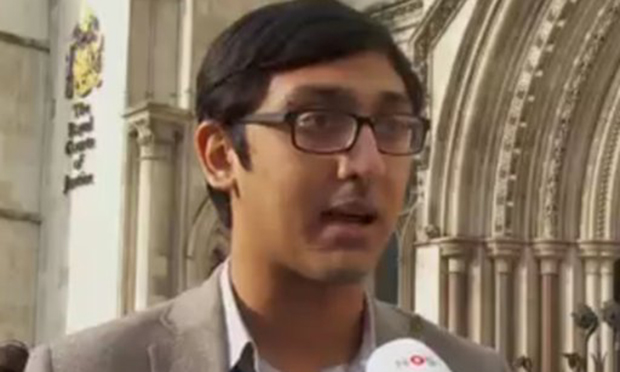 Chowdhury outside the Royal Courts of Justice. Could a law career beckon? Photograph: Tahmid Chowdhury/Twitter

A young Dalston resident says he is considering taking up law after helping lead the legal fight against the government’s efforts to trigger the official process of leaving the European Union without a vote in Parliament.

Tahmid Chowdhury, who is aged just 22, was an interested party in R v The Secretary of State for Exiting the EU, which was heard at the Royal Courts of Justice earlier this year.

Chowdhury, who grew up on a council estate in Dalston and still lives locally, hopes to sit through at least half of the complicated four-day appeal hearing at the Supreme Court next month, when a panel comprised of some of the UK’s finest legal brains will have the final say on the matter.

At stake is whether the government can use ancient powers known as the Royal Prerogative to trigger Article 50 and take the UK out of the transnational bloc without Parliament’s blessing.

Chowdhury told the Hackney Citizen that though he voted Remain he respected the wishes of the majority of voters and believes Brexit must now go ahead.

But he said: “It doesn’t seem legitimate that the government can decide what sort of Brexit people voted for. It seems a lot more legitimate that people we elect and can hold to account can have a say in it.”

He added: “There’s no way of knowing what actually was voted for. It’s just important that we have more information. So it’s so important that MPs who can go back to their constituencies and are in the best position to get that information have their voices heard.”

For his own part, he said he favours a soft form of Brexit whereby Britain would retain access to the single market, possibly in return for less-than-complete control over freedom of movement.

There are no Leave voters among the claimants or interested parties in the legal bid – but Chowdhury insisted some Leavers had been among those who donated to a £300,000 fighting fund.

Gina Miller, the lead claimant, has been the Brexit case’s most prominent backer and has reportedly been subjected to abuse online.

Chowdhury, who recently graduated from university, said: “It has been very intense for her. I don’t know her especially well but she has had to deal with the vast majority of the abuse as well as press coverage that has been quite intrusive. Gina’s got by far the worst of it.”

But he said such behaviour “just makes us even more passionate to win and deliver on the belief of all the people that are supporting us”.

He also described how his involvement in the legal fight had led him to consider law as a potential career option, saying: “I think this case is bringing out a lot of that side of me.”

Asked whether growing up in Hackney had influenced his decision to get so involved in the aftermath of the EU referendum, he said: “I think it did. I wouldn’t go as far as to say it directly led to me to, but growing up in Hackney, it was a very poor neighbourhood. I grew up on a council estate, and it was very diverse and multicultural. It gave me a more global outlook that some people from some parts of the UK don’t have, to some extent.”

Not all youngsters from London are such passionate Europhiles, however.

It aims to allow residents of the capital share their personal reasons for voting in this way and “represent the Leave vote in London in a positive light”.

At the time, Harris said she objects to unelected European Commissioners and what she sees as “a harsh version of capitalism and globalisation…exacerbated by the EU”.