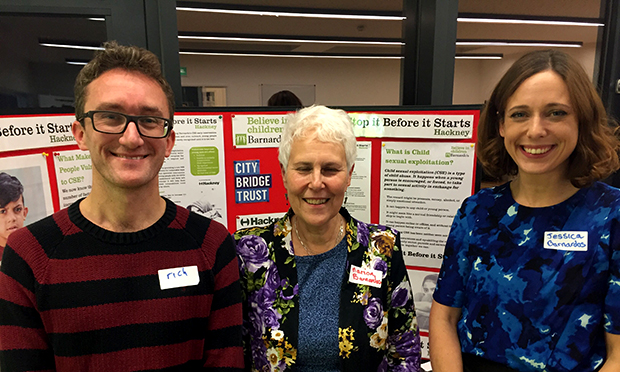 A new service targeting boys and young men in danger of sexual abuse was launched in Hackney yesterday (14 November).

Stop It Before It Starts is a three-year project, run by children’s charity Barnardo’s and funded by City Bridge Trust, which spans three London boroughs.

In Barking and Dagenham, the focus is on children with disabilities. In Wandsworth, the emphasis is on kids who are part of faith groups. And staff in Hackney will concentrate specifically on boys and young men at risk of child sexual exploitation (CSE).

Senior practitioner Rich Faulding is heading up the service in the borough, and he says it is all about “recognition, prevention and early intervention”.

He said: “I’ll be doing two things. The first is helping the voluntary community sector by providing some serious up-skilling for people working with young men and their families. There is an untapped resource in CSE in Hackney and we can really improve the safeguarding of vulnerable lads. Secondly, I’ll be doing lots of early intervention work with boys who are at risk of CSE.”

But Faulding admits that getting young men to open up can be “challenging”.

“There can be an underlying bias in society in which girls are seen as victims and boys are seen as offenders,” he added.

“Girls often internalise if they’ve suffered CSE – they might be the quiet kids at the back of the class – but boys tend to externalise. They can become aggressive, get involved in crime and gangs. They gravitate towards people who offer them something, and that’s how gangs can lure them in before exerting power and control.”

Basing the service in Hackney was a decision led by funding reasons rather than it being a particular danger zone, but the borough is no stranger to gangs, or to crimes involving young boys – it was the scene of one of the most brutal murders in British history, when 14-year-old Jason Swift was kidnapped in 1985 by a gang of paedophiles before being raped, tortured and killed.

Faulding, who has previously worked in children’s homes and prisons, said: “We’re pretty reactive as a society – once something bad has happened, we’re there. But then it’s already happened.

“Hackney has some wonderful organisations to help boys who have tragically been through CSE, and now we want to build something lasting and sustainable to help prevent CSE before it starts.

“It can be very challenging because boys have different ways of communicating. Historically, lads don’t disclose that they’ve suffered from sexual exploitation. They often come from a culture of fear, homophobia and mistrust of authority.

“Something we can do better is to open the door and offer more places for boys to talk to someone. The core message for boys is to talk to a trusted adult.”

Lynn Gradwell, Barnardo’s London director, said: “We know first-hand how easily young people can become involved in situations that lead to them being sexually exploited, and we also know we’re only scratching the surface in terms of the scale of this issue in London.

“It’s a sad reality that young people are being sexually exploited in the capital right now, and many more will become the victims of damaging abuse in the future. Stop It Before It Starts will enable Barnardo’s specialists to support their communities, helping to protect children and young people and empower adults to look out for the signs before it’s too late.”

To get in touch with someone at Stop It Before It Starts, send an email to sbs@barnardos.org.uk

For more information about the project, visit www.barnardos.org.uk/sbs-csc