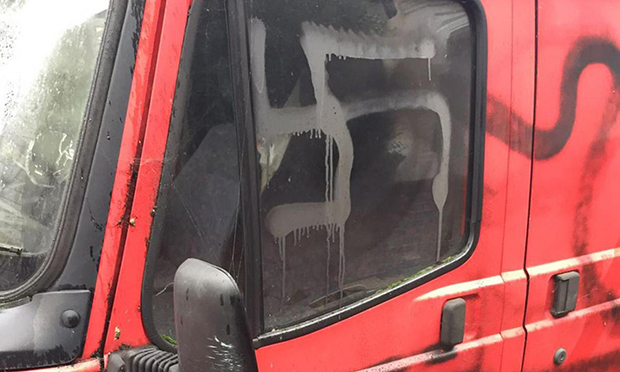 Police are investigating after Nazi graffiti was found daubed on vehicles outside a school in Stamford Hill yesterday morning in the latest incident to have been publicised by neighbourhood watch group Shomrim.

Hackney Council is taking the incident “extremely seriously”, with its community safety chief Councillor Caroline Selman stating: “We will be working with our partners to help address this particular incident and to reassure residents in the Stamford Hill area.”

Previous incidents reportedly included the words “f*** off” scrawled in German next to a swastika on a fence nearby. In June the Nazi symbol was found drawn on several bits of paper scattered in a children’s playground in Stamford Hill.

At the time Rabbi Herschel Gluck warned of “rising” far right extremism, adding that he feared offensive graffiti could lead to other, “more serious matters”.

But Abraham Jacobson, a local councillor for Cazenove ward, questioned whether the extensive reporting of swastika graffiti might be a factor in encouraging it.

He said “pranksters” wanted publicity, adding: “It only takes five seconds and it’s all over the national news. Any prankster can do it.”

Stamford Hill is home to tens of thousands of highly identifiably Jewish people. In a statement released on social media, Shomrim said families had been left “shocked”.

The group told media outlets yesterday: “The vandalised vehicles were parked opposite the entrance of a Jewish girls school on Alkham Road in Hackney, N16.

“Young schoolchildren and their parents were shocked to discover the offensive graffiti. Sadly swastikas and antisemitic graffiti is far too common in Stamford Hill.

Police said officers received reports that two vehicles had been damaged on Alkham Road – on a spot known to be close to Beis Malka Jewish Girls School – shortly after 9am on Monday.

A spokesperson for Scotland Yard said: “Two vans that were parked at the location were found to have been damaged with paint and abusive graffiti, including swastikas.

“The matter is being investigated by officers from Hackney.

← Win a pair of tickets to ‘A Pacifist’s Guide to the War on Cancer’ at the National Theatre!Charity launches project to prevent sexual abuse of boys in Hackney →