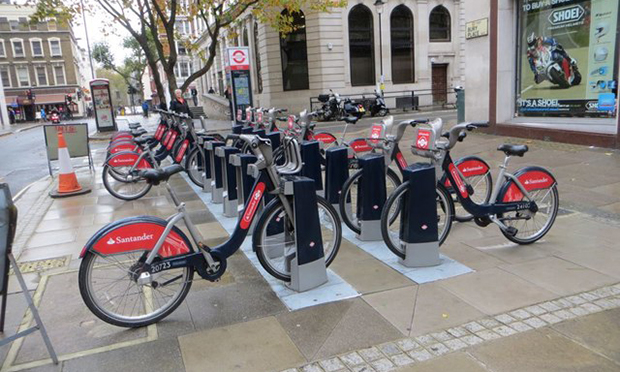 Hopes of bringing Transport for London’s (TfL) hire bikes to Dalston have skidded to a halt after scarce funds put a spoke in the wheel of plans to expand the scheme.

Anyone wanting to hire one of the so-called Boris Bike cycles in the north of the borough in the near future will see their hopes punctured.

The bikes first hit the streets in 2010 and were initially confined to the core of central London.

The public hire system, now officially known as Santander Cycles, soon expanded all the way west to Hammersmith and east to Poplar. Hackney appears to have been left out, however.

There are some cycle hire docking stations in the borough – 25, according to the council – but almost all are clustered on the fringes of the City so are of little use to most residents.

Caroline Pidgeon, who chairs the London Assembly’s Transport Committee, said there was a strong case for further rolling out the scheme to cover all of Hackney.

“The case for extending the scheme into Hackney makes real sense, especially as this is such a cycle friendly borough,” she told the Hackney Citizen.

And Jono Kenyon from the Hackney branch of the London Cycling Campaign said Hackney had effectively been ignored by those in charge of distributing cycle hire docking points.

“Look at a map of Hackney, just Hackney in isolation, and ask if this borough is well served by the cycle hire scheme,” he said. “Clearly it is not.”

He added: “There’s no really good reason not to continue expanding a successful transportation scheme.

“Look at the Tube – it goes to Amersham, the countryside, and yet this part of inner London is not served by the cycle hire scheme. Hackney is pretty damn central, yet it isn’t served.”

The march of the docking stations stops just north of the Regent’s Canal – much to the chagrin of some commuters who want to use the vehicles to convey themselves all the way to their workplaces in Hackney Central, Homerton or Stoke Newington.

These include some council employees working at the Town Hall, and staff nurses at St Joseph’s Hospice.

The latter wrote to transport bosses asking for a docking station to be installed on a nearby pavement.

They were politely informed in a letter from TfL that this was not possible because “at present we do not have funding within our business plan to expand the scheme outside of the current footprint or to install new docking stations”.

TfL’s focus is currently on filling in the gaps between docking stations in areas already well covered, the letter explained, though transport bosses insist they are always willing to “discuss” proper expansion of the scheme.

Councillor Feryal Demirici, the politician in charge of transport in Hackney, said the council had asked several times for the scheme to be extended further north.

She said the Town Hall had “regularly requested further extensions of the scheme into the borough particularly up to Dalston.”

Transport policy experts say such an extension would be desirable to help relieve pressure on the frequently overcrowded London Overground line that serves Dalston Kingsland Station.

Cllr Demirici added: “The last successful extension of the scheme within the borough was into the Queen Elizabeth Olympic Park, which Hackney Council requested with others, as TfL were not originally going to place the bikes into the park.”

Paul Cowperthwaite, general manager of Santander Cycles, said: “At present, the main focus of the cycle hire scheme is to identify more sites within the area currently covered by the scheme.

“However, we are always happy to discuss further expansion, and actively engage with boroughs and private landowners to try and bring the benefits of the scheme to as many people as possible.

“Securing the required funding for both the capital and operational expenses related to expansion is a challenge, but there is potential to try and assemble a suitable funding package for new stations.”

Each cycle hire station costs around £200,000 to install and maintain.