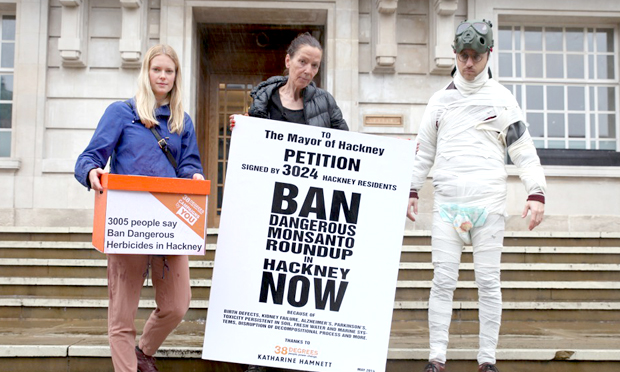 Hackney Council sprays around 1,200 litres of weedkiller glyphosate in the borough each year, a Freedom of Information request has revealed.

The council’s enthusiastic use of the herbicide has been criticised in the past by figures including former Friends of the Earth executive director Tony Juniper.

Three years ago it was revealed the council spends £40,000 each year on dousing the borough’s streets with glyphosate, which the World Health Organisation last year found was “probably carcinogenic to humans”.

Fashion designer Katharine Hamnett, who has run high profile campaigns against the council’s glyphosate use in the past, today told the Hackney Citizen: “It’s horrendous. I heard they were looking at alternatives. They should be because this stuff is carcinogenic.

“The Labour Party locally is having a meeting on the environment and I actually wrote to them about glyphosate. France is virtually glyphosate free.”

She added: “Hackney is twinned with the town of Suresnes in Paris, which is pesticide free. Their mayor is prepared to give us a demonstration of how they do it.”

A Hackney Council spokesperson said: “We have not changed our policy in relation to the use of glyphosate.

“Hackney Council uses glyphosate primarily to control weeds on paths and shrub beds. It is administered by qualified staff or contractors who target the spraying and follow the application guidelines, always trying to minimise the volume of glyphosate used.

“We will continue to use glyphosate for the targeted spraying of weeds as it continues to be declared safe by the Department for Environment, Food and Rural Affairs, the Health and Safety Executive and the European Union.

“We follow government guidance but are open to alternative removal methods if they can be shown to be effective and affordable.”