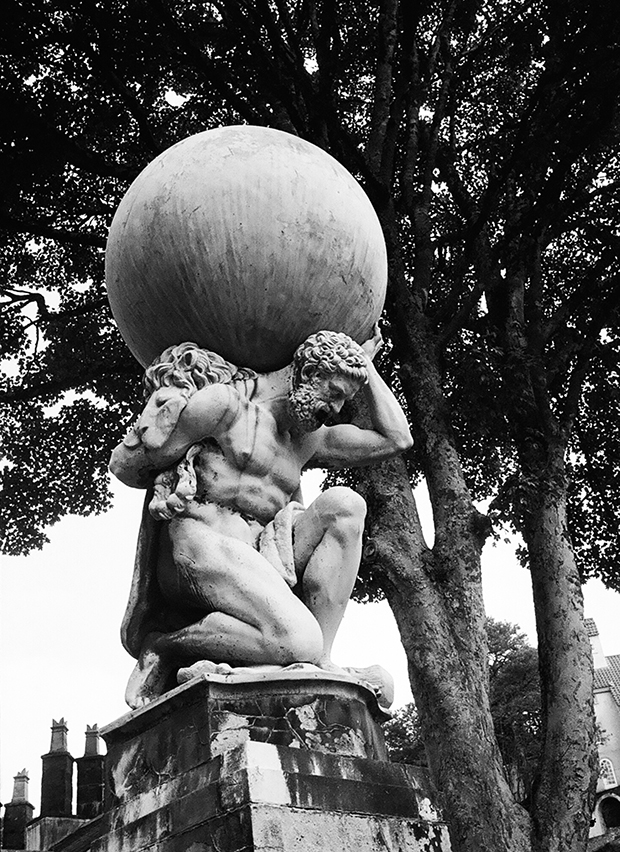 Statuesque: Atlas shoulders the weight of the world at Portmeirion, one of the featured places in the book. Photograph: Travis Elborough

On the outskirts of Mexico City, we’re told, are “the last vestiges of a gigantic and ancient system of canals, terracotta aqueducts and tens of thousands of man-made islands… called chinampas”, one of which has become known as the Island of Dolls.

This “terrifying attraction” was formerly home to a lone hermit, Don Julian Santana Barrera, who one day discovered the body of a young girl drowned in the canal.

The next day, the recluse found a doll washed up on the shore, which he believed must have belonged to the girl, so he attached it to a tree in her memory.

When another doll arrived, the “one-off tribute [turned] into an obsession and before long Don Julian was fishing about in the canal and scouring local rubbish dumps for more dolls to place in trees and to furnish his makeshift abode”.

The loner died in 2001, reputedly drowning in the same part of the canal as the girl, and the place has since grown into a gallery of hanging dolls, with visitors travelling to add to the collection. Oddly, “the life cycles of these anthropomorphic creations” are “alarmingly similar to our own”. It’s a curious and delightfully eerie tale.

Stoke Newington author Travis Elborough’s Atlas of Improbable Places is a collection of short essays describing some of the strangest and most historically-obscure locations across the globe. Split into six sections – Dream Creations, Deserted Destinations, Architectural Oddities, Floating Worlds, Otherworldly Spaces and Subterranean Realms – the peculiarities contained in this somewhat bizarre book are manifold.

From the aforementioned Isle of Dolls to a squatter metropolis in California, Ireland’s bloody and haunted Leap Hall, and media tycoon William Randolph Hearst’s never-completed mansion, there’s plenty of interest to explore.

Among the highlights is a fascinating account of the formation of a subterranean network of tunnels in the Canadian city of Moose Jaw, where a community of Chinese workers – who arrived to work on the Canadian Pacific Railway – were driven underground as scapegoats when the country slipped into recession.

And then there’s Wrangel Island, on which herds of woolly mammoths thrived while their kin were elsewhere dying out.

Elborough seems particularly intrigued, though, by the geographical remnants of the Soviet Union, and the articles resulting from this are invariably captivating.

He writes of a once closed Soviet city that could now “be taken for a vintage Soviet theme park”; of the Darvaza Crater, or Door to Hell, in Turkmenistan, where a team of Soviet geologists drilling for natural gas in 1971 “blundered and created a deep sinkhole oozing potentially poisonous methane vapours”, which they proceeded to set alight; and then also the acutely symbolic Hill of Crosses in Lithuania.

The release of Atlas of Improbable Places follows Elborough’s excellent A Walk in the Park, and it’s most certainly welcome. It’s informative and enthusiastic, scholarly and amusing. While it might seem tempting to pop this book in the loo and flick through it in short bursts, it’s best read in one or two long stints – not least because once started it’s nigh on impossible to put down.

← Guerrilla Girl power! Feminist ‘masked avengers’ come to East London to take on art worldSagardi – restaurant review: ‘The waiters wear wireless headsets, like they are in the secret service’ →