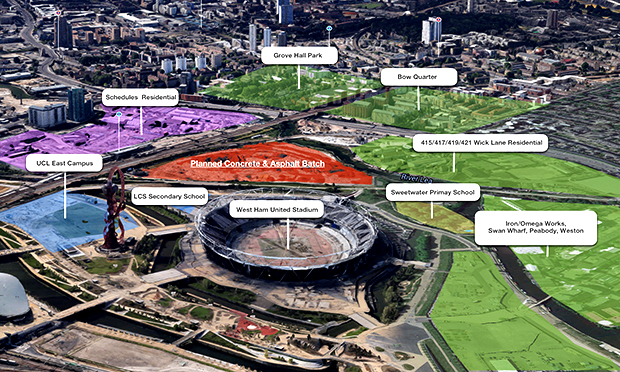 Campaigners and residents have slated “tragic” plans to build three concrete factories and an asphalt plant inside the Olympic Park.

The proposals for Bow East Goods Yard will see the factories built on a derelict site at Pudding Mill Lane, close to the London Athletics Club and new UCL East campus.

Residents say that hazardous chemical dust from the site poses a serious health risk to the populations of Hackney, Tower Hamlets and Newham.

The father-of-one, who lives on nearby Wick Lane, said: “London is about to commit a huge mistake. Once millions of pounds have gone in to building these factories, they won’t be demolished.

“It’s like watching a road accident happening in front of your eyes.

“It is tragic. This will be one of the biggest industrial sites in London. And it will be built in a residential area.

“The whole thing is a combination of stupidity, inertia and financial interest.” 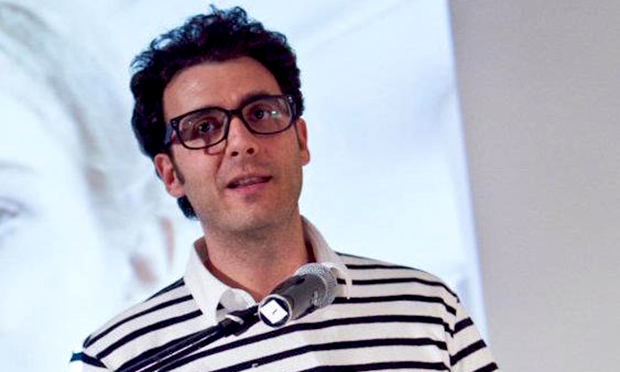 Protest: Hanan Maayan is leading the campaign to scrap the factories. Photograph: OPCRD

Mr Maayan has launched a petition, now signed by more than 8,500 people, calling for the London Legacy Development Corporation (LLDC) to block the plans.

The LLDC controls the Olympic Park site and is tasked with protecting London 2012’s legacy. Its planning committee is set to decide on the factory proposals in September.

Former Mayor of London Boris Johnson joined LLDC last year to announce plans for a new housing development at the Olympic Park. The Sweetwater estate will contain 650 homes, as well as a new primary school and two nurseries.

Supporters of the petition say the proposed industrial plant is not in keeping with LLDC’s vision for the park’s future.

Rebecca Ward said: “Utter disgrace after encouraging local businesses and schools to develop there. Just no!”

Andrew Irvin added: “The air quality is already bad enough. My wife is pregnant – what sort of environment will this create for our newborn?”

Another resident, Gemma Bell, who has lived on Fish Island in Hackney Wick for seven years, said she would be forced to leave if the plans go ahead.

She said: “This would directly affect my daily life in a negative way, and bring the entire appeal of the area, the road I live on and the atmosphere down significantly.” 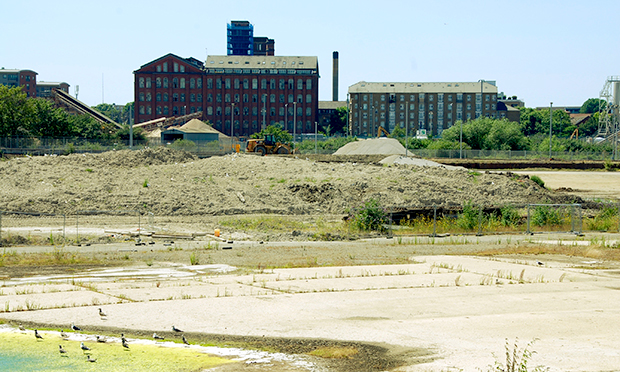 Derelict: the site under consideration for the industrial plant. Photograph: OPCRD

But others cited the area’s industrial history. Joe Giacomet wrote on Facebook: “I get the problem, but there’s been concrete factories there for years.”

And Fiona Sibley commented: “It depends whether you think it is better for concrete, which is needed for all the development in this area, to be shipped in from further way. More road miles.”

But Mr Maayan said: “We’re not anti-industry, but why this industry? Why not energy, bio-mass or recycling?

“This is a classic case of trying to hold the stick at both ends. No-one involved is evil, and everyone is just trying to do their jobs, but supporting both the regeneration of the area and a polluting industry is impossible.

“After reviewing the survey data, we were horrified. The noise survey basically assumes that all residents in the vicinity will never open their windows.

“There are omissions, inaccuracies and a general sugar-coating of the data.”

Four separate companies have lodged applications with the LLDC to use the site at Pudding Mill Lane, and the factories are set to run 24 hours a day, seven days a week.

A spokesman for LLDC said: “The Bow East Goods Yard is designated as a Strategic Industrial Location.

“Any proposed development will be assessed by the Planning Authority in terms of its environmental and transport impact.

“There has been consultation with local residents, businesses as well as with local authorities, the Environment Agency and other statutory bodies.

“The Planning Authority has also sought the views of independent environmental consultants to help in its decision-making.

“The application is likely to come to the Planning Decisions Committee in September and this will be confirmed nearer the time.”

Mr Maayan’s petition will also be delivered to Mayor of London Sadiq Khan, who ultimately oversees the LLDC.

“We know air pollution is an issue close to the Mayor’s heart and it is something he is trying to fix. But this ain’t fixing it,” Mr Maayan said.

A spokesperson for Sadiq Khan said: “The Mayor does not have planning powers to call this application in and it will be determined by LLDC.”