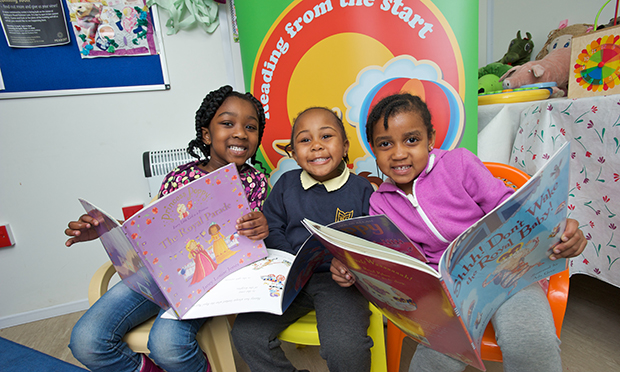 Children taking part in Peabody’s literacy project, which is part of the education scheme

A “cradle to career” education programme for youngsters inspired by schemes run at Harlem Children’s Zone in New York – an institution backed by Barack Obama – has marked its first year of operating in Hackney.

Housing association Peabody, which owns the Pembury Estate near Hackney Downs, says it will offer “holistic support for everybody on the estate” through education outreach work including giving free books to families.

Benjamin Blades, from Peabody, said: “Looking back at the first year, maybe the numbers don’t seem that big but actually 158 kids under five getting a free book every month does make a big difference.

The projected is scheduled to last for a decade, and Blades said: “It has to be for 10 years, because otherwise you won’t see the proof that stuff like this makes a difference.”

The anniversary comes as a new report to be published this month found there have been major improvements on the Pembury Estate since the 2011 riots, when violence and unrest flared in the area.

Three quarters of 117 residents who participated in a survey believe that the area has become “much better” in the five years since 2011.

According to the report, published by Peabody, Hackney Council and Save the Children, people living on Pembury a “very strong sense of community” with 85 per cent of those surveyed saying they felt “positive” or “very positive” about living there.

Stephen Howlett, Peabody’s chief executive, said: “Peabody is investing heavily at Pembury. Last year we completed 268 new homes and a brand new community centre. But more than that, we are investing in the future of our community.

“The Pembury Children’s Community is ambitious – alongside Hackney Council and Save the Children we aim to significantly improve the lives of Pembury’s 900 children and young people and their families. Through a wide range of support programmes we are already helping to make Hackney a place of opportunity for all.”

Tim Shields, Hackney Council’s chief executive, said: “We’re delighted to be working in partnership with Peabody on the exciting Children’s Community programme. This pioneering approach is helping children, young people and families on Pembury to gain skills, grow in confidence and get the best out of life.”

Meg Hillier, MP for Hackney South and Shoreditch, said: “Pembury has always had a strong community spirit, and the children’s community programme is a great addition to the area.”