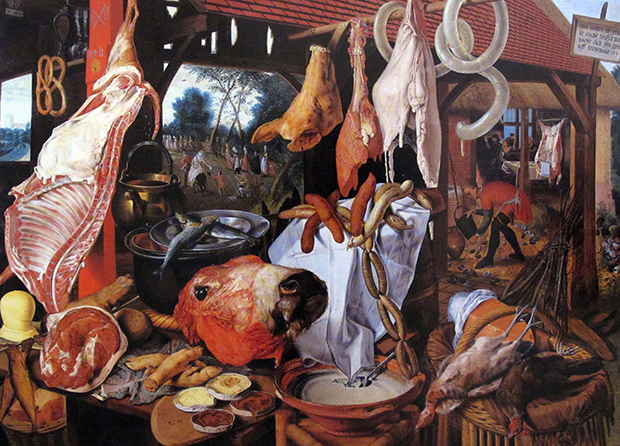 Hackney citizens who love offal can enjoy everything here. There’s the posh stuff, like devilled kidneys or luscious roast bone marrow, available at St John Bread and Wine, or the braised ducks’ tongues at Sichuan Folk. Whilst for home cooks there is Ridley Road Market, where the array of things you might not want to look at twice are in fact a joy to behold.

It all depends on how you define offal: everything that isn’t muscle-meat can be in our line-up, from tail to toe as Fergus Henderson has it. So: tails, trotters, feet, claws and heads, including  jaws, tongues, snouts, cheeks, ears, not forgetting brains and eyeballs.

Then swallow hard and go down the throat to the windpipe and aesophagus, to which are attached the ‘pluck’, a gloriously coloured grouping of lungs, heart, liver, spleen and pancreas, so often the eye-catching focus of Dutch still life painting (above right).

Then tangle with stomach, bladder (which blown up makes a nice football), kidneys and into the long and winding road through the intestines, gathering up testicles  and  bits of backbone on the way. Which is not to mention the gizzards, hearts and livers of poultry, and piles of their blanched and palid feet, like the hands of drowned corpses – and all of this is not just edible but seriously delicious.

In the past these were not just the unmentionable bits the poor were glad to get hold of cheaply, but delicacies in their own right.

When Thomas Cromwell, hero of Wolf Hall,  was seeking his fortune in commerce and diplomacy in Europe, he must have charmed his way into sumptuous aristocratic banquets which included sophisticated dishes made from various offal parts, and brought these gastronomic delights back to his country house in Hackney.

He would have known Bartolomeo Scappi’s influential cookery book, published in 1570, which had a section on menus served at posh dinners in Rome, and a surprising number of dishes were of offal, and not just the nice items like sweetbreads and brains, but weird bits as well.

A kid’s head, roasted or stewed, then coated in egg and breadcrumbs and deep fried to get a lovely golden yellow, decorated with slices of lemon. Calves’ intestines and pluck get as much care and attention as veal liver and the prestigious roasts.

So we can go back to Ridley Road and look with fresh eyes at its offerings of offal – wholesome and delicious, and above all honest; what you see is what you get, whilst heaven knows what awful slaughterhouse slurry and unwanted body parts go into the cheap sausages and burgers on offer.

Kingsland Butchers explained to me how to cook their calves’ feet, chopped up and simmered long and slowly in water with your prefered spice mixture to achieve an unctuous broth to which vegetables and herbs can be added to make an invigorating and restorative soup.

Renaissance banquets offered lambs and kids’ heads cooked with care and served up as delicacies, decorated with a golden sauce and blue borage flowers or bright red pomegranate seeds.

Ridley Road has plenty of heads, and customers for them. The Turkish supermarket at the far end of Ridley Road has a fascinating meat counter, with everything from lambs’ trotters to sweetbreads and intestines.

Dietary restictions keep pork away from Ridley Road, but it’s not far to the Ginger Pig in Lauriston Road for a whole new world of offal and pig parts.

Home made pies and faggots can include offal, and the delicious brawn depends on all the unctuous parts of a pig’s head and trotters.

The Ginger Pig website has some delicous recipes for pig’s head, ears and tail, easy to follow and well worth a try.

Maybe our ubiquitous legionary stopped off to get a trotter or two to munch on as he trudged up Stamford Hill, remembering an early tour of duty in Tunisia where he admired a mosaic pavement with a plate of trotters decorated with bay leaves?

The English tradition of ‘keeping a pig’ lasted well until World War Two, fattened on household scraps and its own rations.

Back then it seemed we had all reverted to medieval habits, salting and curing hams and bacon, melting down the fat to make lard, enjoying the lovely crunchy bits left in the pan and eating up the liver and kidneys with relish, whilst cutting up the rest into joints for family and friends.

This was when a jar of home-made lard was a true mark of friendship.