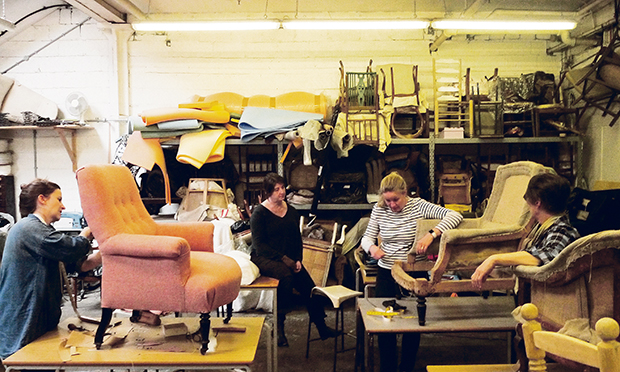 Chair repair: upholstering in action at the School of Stuff

The shapes of furniture are weird. Their curves and angles of wood or plastic, strange bulges and depressions, make sense to the body but not to the eye.

So it’s at once unsettling and reassuring to rifle through the Pictorial Dictionary of British 19th Century Furniture Design, in which chairs and their friends throughout the ages are depicted without any humans present.

Forms are presented in all their stand-alone visual bizarreness, but are also domesticated into changing styles and periods, and shown to be part of life after all.

It helps to have a guide. Amanda Girling-Budd, a one-time TV producer, has been a professional upholsterer for many years and holds a PhD in the history of design.

She now teaches the craft – alongside cabinet-making and furniture restoration – at her establishment the School of Stuff, housed in Lighthouse Studios on Shacklewell Lane.

The Pictorial Dictionary has been brought out to illustrate the history of ‘buttoning’, the activity being done in the workshop by students on the School of Stuff’s two-year traditional upholstery course.

“The interesting thing about traditional upholstery is it sounds like ‘upholstery the way it’s always been done’,” muses Girling-Budd.

Buttoning is a case in point, developing from a functional way of tying a thread through a chair to hold the stuffing in place into a highly decorative method of folding deep gorges in geometric patterns into the shape of a piece of furniture.

But buttoning comes late in the process. Traditional upholstery starts with a wooden frame for the chair, onto which strips of webbing are tacked.

Over the webbing is placed a stretch of hessian, a coarse, tough fabric, which is the base, ultimately, for everything that goes between the webbing and the eventual posterior of the seated user.

The next step is, surprisingly, to add coconut hair. Coir fibre, as it is known, is shaved from coconuts then washed, dried, permed and dyed before being shipped to upholstery studios worldwide.

Animal hair used to be used, but is very expensive compared to coir.

Springy, if rough, to the grip, there is a huge sack of coir in Girling-Budd’s workshop and the three students are as we speak stuffing it into the chairs they’re upholstering.

Once the coir is in place and covered with another layer of fabric, stitching can be applied to shape it into decorative or functional contours.

After this is done, another layer of softer stuffing – usually animal hair this time – can be added for a more comfortable sedentary experience.

Then it’s time to add the final covering, which can be coloured or patterned or fulfil whatever decorative desires a client has voiced.

This is also when buttoning takes place, adding further interest and shaping to the finished chair.

“Traditional upholstery is rather like tailoring,” reflects Girling-Budd. “You start with a body and you fit some clothing to it.”

Like tailored clothes, traditional upholstery is labour-intensive and can, therefore, be expensive. But even in the age of flat-packs, Girling-Budd is confident of traditional upholstery’s continuing appeal: “maybe it’s because we’re a bit of a throw-away culture, people like the idea of doing something that’s going to last a bit longer,” she reflects.

“I think there’s several things people find appealing about it. There’s the whole design-y side – making something look lovely – and then there’s the craft skill, finding out how to do a craft; and then there’s also recycling: sometimes you’re bringing something that would otherwise be fit for the rubbish heap back into use again.”

So if you too sometimes fear chairs, you could do worse than getting to know them and their place in the world better, and taking a course in upholstery.

← How citizens are seeking to solve the housing crisis from the bottom up‘Perpetual insecurity’: author Rosie Walker on the Rent Trap →