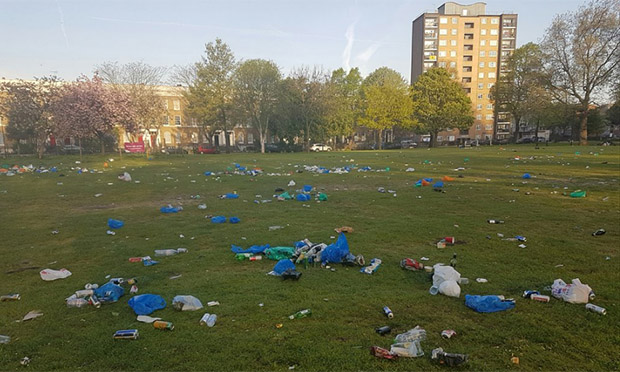 Furious residents are demanding that Hackney Council ban barbecues on London Fields, after the park was left scorched and covered in litter over the weekend.

“There was smoke everywhere, noxious fumes coming from their barbecues, people sitting cheek by jowl. I wouldn’t be going there. It’s dreadful.”

There was “considerable drinking” going on until well into the night, broken bottles were left in the grass, and people were urinating in the woods, Mr Martin claimed.

Think you’re having a bad #Monday? Spare a thought for the @hackneycouncil workers cleaning up #London Fields 😷 pic.twitter.com/rP2lycpjAC

After residents complained the park was short on bins, Hackney Council has promised to install more, and increase litter pickers.

The council said much of the rubbish was left late in the evening and so it will step up security staff on sunny weekends.

But bringing in bins will not solve the problem, said Mr Martin. “There’s plenty of bins over there. But the amount of people over there last weekend was incredible.”

Hackney Council said allowing barbecues continues to be reviewed on an annual basis – but it has no plans to ban them at the moment.

A spokesperson for Hackney Council said: “Following consultation with residents about barbecues in London Fields in 2011, there was support for them to be allowed in the park. Whilst they are allowed in a small section of the park, their use is restricted and enforced.

“London Fields was a popular park before barbecues were allowed and the issue here is not the number of park users but the unacceptable behaviour of a minority. All park users have the responsibility to clean up and dispose of their rubbish.”

The spokesperson added: “To fine someone for littering you have to see them drop the litter and walk away. Doing this in a park when people are sat in large groups having picnics and barbecues is difficult.”

Hackney Council tweeted pictures of the park on Monday morning:

Another beautiful morning in #londonfields . It would be nice if people at least put their rubbish near the bins pic.twitter.com/w0K2ULFdOP