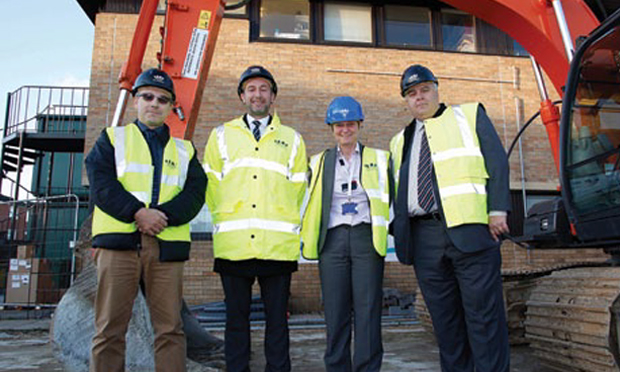 The hospital’s pathology department, which analyses blood and urine samples, had been earmarked for an upgrade.

The £6.2 million contract to build a new three-storey facility was awarded to Longcross Construction Ltd by Homerton University NHS Foundation Trust in August 2014.

Work began that year on a building to house the laboratory and testing services, on a site nestled between the existing pathology department and boiler house.

The new building was due for completion in early 2016, but Longcross went into administration in June last year, leaving the hospital with little more than a hole in the ground.

By this time the trust had already shelled out £1.4 million for the “first phase” of the new department in the financial year to 2015, according to its annual report.

But the trust insists that “no money has been lost,” even though it is considering whether or not continue with the project.

Tracey Fletcher, Chief Executive of Homerton University NHS Foundation Trust, said: “No money has been lost but £2m worth of costs have been incurred involving the relocation of pathology staff, the ground works and access road changes which have been carried out on the building site (by Longcross sub-contractors) and overall design/approval fees required for the tender process.”

“The Trust is still weighing up the matter of whether or not to continue a new build pathology facility on the vacant site as part of the current review of pathology services.”

The Trust regarded the new pathology department as a key part of its strategic vision to improve its quality in the future, according to its 2014/15 annual report.

It costed the entire scheme at £11.3 million.

Questions have been raised about why the Homerton had not insured itself against the contractor going into liquidation.

The Trust assured the Hackney Citizen that “clients rarely insure against companies going out of business” – but rather, as standard practice, have penalty clauses written into contracts to cover against such instances as overrunning work, escalation and failure to meet deadlines.

However the trust did have a performance bond of 10 per cent to be paid by the contractor for failure to complete the work, according to minutes from the December 2015 Council of Governors meeting.

Questions have also been raised as to why the board awarded the contract to Longcross.

Tracey Fletcher, Chief Executive of Homerton University NHS Foundation Trust, said: “The contract was awarded to Longcross Construction following a full OJEU [Official Journal of the European Union] procurement exercise with four bidders reaching the final round of evaluation. Longcross had a track record of building a wide range of schemes.”

Most hospitals in England are now managed by NHS foundation trusts, which are self-standing, self-governing organisations that were introduced in April 2004.

They differ from other existing NHS trusts, in that they are independent legal entities and having unique governance arrangements.

NHS foundation trusts are not performance-managed by health authorities.

They can raise capital from both the public and private sectors, within borrowing limits and retain financial surpluses to invest in new NHS services.

They are accountable to local people, who can become members and governors, and are overseen by NHS Improvement.

NHS Improvement declined to comment on the awarding of the contract by the Homerton to Longcross.