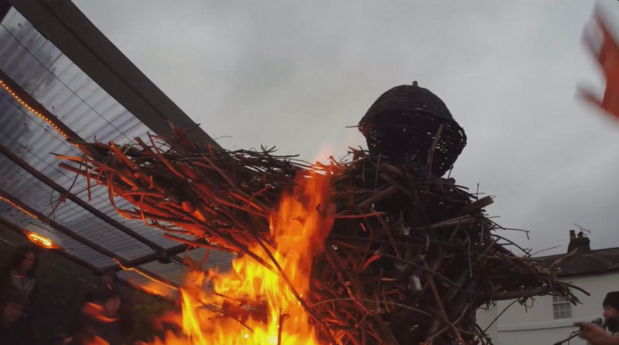 A Dalston car park will stage the burning of a wicker man this weekend as local foragers herald the start of the summer with a pagan-style festival.

The Foragers, a team of ‘hunter gatherers’, will on Saturday 30 April be holding a ‘Wicker Man May Fest’, drawing on pagan rituals, at the Bootyard in Abbot Street Car Park.

Revellers will be treated to wild foraged food, some of which will be seasoned with herbs containing mild psychoactive effects such as wormwood.

Forager Richard Osmond told the Hackney Citizen: “We’re doing it to celebrate May in the folky, country way of bringing in the new summer and celebrating ahead of what we hope is a good year of crops.”

For the event, The Foragers and neighbouring 40FT Brewery will be serving a collaboration brew made from sweet woodruff, a vanilla-scented herb traditionally used in Eastern Europe at the start of the summer.

Then at sunset, the group will set fire to a 7ft wicker man to music by The Princes in the Tower, a costumed medieval trio.

Mr Osmond said: “I’m trying to get it to burn quickly and safely so I’ve included some Japanese knotweed that everybody’s trying to get rid of because it’s so invasive.”

To close the celebration, there will be a screening of the 1970s classic film The Wicker Man, which will be shown in a pop-up shipping container cinema.

Mr Osmond added: “There’s actually not much evidence that the wicker man was used much in paganism but we think it’s a good symbol because the film is all about the virtues of getting in touch with the old ways and coming closer to nature. That’s what we’re all about.”