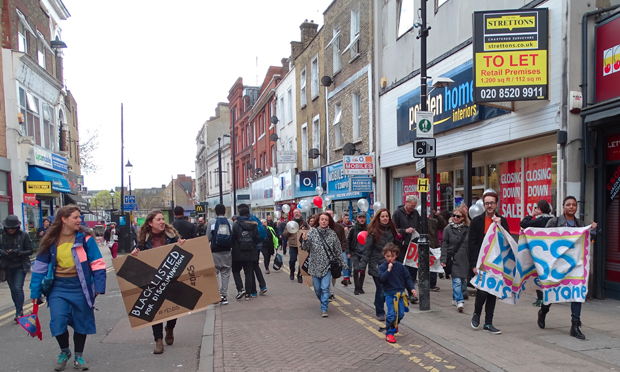 Housing protesters on the Narrow Way in Hackney

Campaigners, outraged at the government’s new housing bill, staged a series of protests against the proposed changes in legislation on the 15 and 16 April.

A vigil was held outside Hackney Town Hall on 15 April at 7pm. This was followed up the next day by a march on Westminster alongside other housing activists from across the capital.

Key aspects of the bill being questioned were the potential selling off of council homes to private companies and introduction of pay-to-stay, whereby better-off council tenants would be met by sharp increases in rent.

The march commenced at 12 noon on the Saturday. Tenant organisations, trade unionists and activists from all over London convened at Westminster. Hackney’s mayor Jules Pipe, Hackney Cabinet Members and local councillors also joined in.

Among them was Labour councillor Philip Glanville, who said the march sent “a powerful message about the damage the Housing Bill will cause our mixed communities”.

Pointing out the effect this will have on the worse off, Cllr Glanville said: “Here in Hackney we need more social and affordable housing not less, and we will continue to oppose the forced sale of council homes, pay to stay, starter homes and the end to lifetime tenancies.”

Mavis McGee, who is Chair of the Clapton Neighbourhood Panel, said the Housing Bill had the potential to be “one of the most damaging pieces of legislation ever imposed upon the less fortunate of this country”.

“Council housing works, they just don’t get it. They are forcing our council to sell its stock. It has to be made clear to tenants that the government is doing this, not the council – everyone needs to protest to protect their homes.”

With the awareness of the proposed bill raised, and many MPs against it, the policy changes faced fierce resistance in the House of Lords, with the government losing around half a dozen votes.

Kill the Housing Bill and other housing activists have planned another protest outside the Houses of Parliament, to be held on 3 May from 12–2pm.