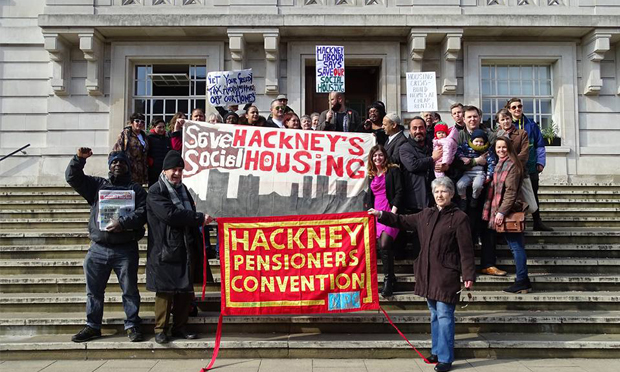 Up in arms campaigners plan to voice their discontent over the government’s proposed housing bill with a series of demonstrations this weekend.

A vigil is taking place this evening at 7pm outside Hackney Town Hall, ahead of a march to ‘kill the bill’ on Saturday.

Campaigners are concerned that the new bill will not solve the high cost of housing and will lead to higher rents and house prices.

According to one of the campaign flyers, the proposed bill will lead to empty council houses being sold off, as well as the loss of lifetime tenure and succession rights for children.

Campaigners also warn that the bill will create “unaffordable starter homes instead of social housing” and that “working families will have to pay extra to stay in their council homes”.

Councillor Philip Glanville, Cabinet Member for Hackney Homes and Regeneration Estates, told the Hackney Citizen: “Starter homes won’t offer any solution to the housing crisis. It will fail to get people into home ownership. We are really worried about the impact of the bill.

“I’ve been working with the tenants and campaigners for the last housing march and this one and organising the vigil this evening. We are mutually supporting each other over these key issues in the housing bill and making sure it receives the biggest attention it can.

“The key thing for me is working with tenants to save Hackney social housing – from the sell-off of council homes to the introduction of pay-to-stay, which would put poorer families in real difficulty.”

The march, which will join up with the People’s Assembly National Demonstration in Westminster, begins outside Hackney Town Hall at 12 noon tomorrow.

Cllr Glanville has written a letter to William Richardson at the Department of Communities and Local Government outlining his concerns.

The letter states that the policy “will act as a significant disincentive to work and aspiration” and will “increase housing benefit costs for the government”.

According to figures quoted in the letter, Hackney Council currently owns and manages 22,382 rental properties and 8,518 leaseholder and freeholder properties within the borough.

“The council has a waiting list of 11,036 households and over 2,000 homeless households living in temporary accommodation,” the letter states.

Figures from the Office of National Statistics describe Hackney as the 11th most deprived local authority in the country, with 70 per cent of all households on an income of £30,000 or less.

In his letter, Cllr Glanville describes how “this is in a context where house prices in Hackney have risen by over 60 per cent over the past five years”.

Support Hackney tenants and join the demo on Saturday pic.twitter.com/GQjjl2kxw0

← Pensioner found guilty of murder after beheading estranged partner Judith NibbsFuture PSPOs: we will not rule them out, says Hackney Council →