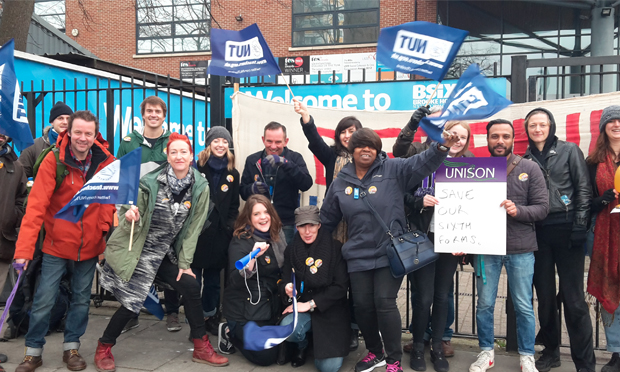 Teachers at a Hackney sixth-form college took strike action on Tuesday over cuts to further education.

Lessons were cancelled at BSix College, Clapton, after the government’s last-ditch attempt to stop the strike failed at the High Court.

Teachers took to the streets as part of national strike action over a 14 per cent cut in funding for sixth-form colleges during the last four years.

A rally took place in central London, where teachers delivered a letter of protest to the Department for Education (DfE).

Jamie Duff, President of the Hackney branch of the National Union of Teachers (NUT), called the government’s attempt to stop the strike through the courts “desperate”.

“This sorry attempt to bully teachers prepared to stand up for education has failed,” said Mr Duff.

“The working conditions of a teacher is the learning environment of a student – teachers will not stand by and let this government continue its unnecessary attacks on sixth-form colleges.”

The NUT has called on the government to restore funding to further education to the levels that existed before the coalition came to power in 2010.

The union is also opposed to a government review of further education, announced in January, which the NUT said “threatens the very existence” of sixth-form colleges.

Lauren Pemberton-Nelson, a student at BSix, was in support of the strike, saying sixth-form colleges are vital for students.

“The cutting of funding is ridiculous and the fact they do not ask our opinion shows that they really do not care,” she said.

Another student, Dylan Chung, added: “The future of this country could be a bright one if the government invested in the education of the younger generation.”

The walk-out went ahead despite the DfE claiming the strike was not a trade dispute as defined by law.

After the High Court threw out the challenge to the strike, a spokesperson for the DfE said: “The NUT is seeking to disrupt the education of thousands of students and damage the reputation of the profession.”