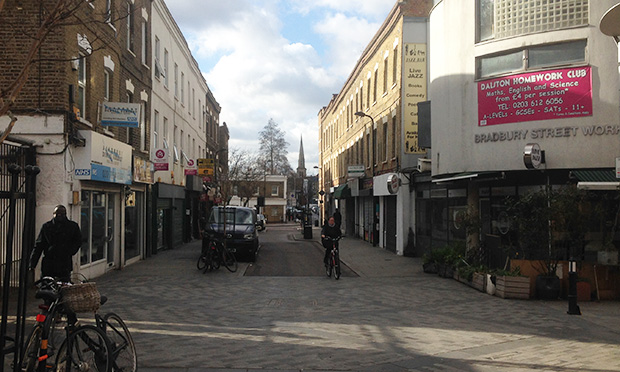 On track: TfL has been given go ahead to run new Crossrail 2 line through Dalston. Photograph: Pascale Hughes

Divisive plans to demolish buildings in Dalston to make way for Crossrail 2 could be a step closer to reality after the rail route was given the go ahead.

The National Infrastructure Commission, an independent body set up by Chancellor George Osbourne, urged ministers last Thursday to take forward “as a priority” plans for a £27 billion north-south line linking Surrey to Hertfordshire via central London.

Dalston independent shopkeepers have renewed their calls for Transport for London (TfL) to drop proposals to knock down the southern side of Bradbury Street, which is earmarked for a new station entrance and ticket hall.

Ro Rai and his wife Sanju Tamang run Mero Retro, a shop on the north side of Bradbury Street. Mr Rai said: “It is no great surprise that Crossrail 2 is going ahead.

“The announcement only increases the urgency of our campaign of trying to protect our street and community. We’re not campaigning against the infrastructure. It’s just the impact on our part of the community that is our concern.”

Mark Shaffer runs White Rabbit restaurant, one of the businesses that would be forced out should TfL drive through its proposals for the station entrance.

“People on this street are left in limbo,” said Mr Shaffer. “It is difficult to make a plan when you might be kicked out. These are people’s businesses. What are we supposed to do?”

Mr Shaffer urged TfL to use Kingsland Shopping Centre, which is a short stretch down Kingsland Road from Bradbury Street and up for redevelopment, as an alternative site for the station entrance.

“Surely the right way to approach this is to work with the developers of the shopping centre, secure the site and sit on it up until the point when they are ready to build, rather than destroying peoples lives and upsetting locals on Bradbury Street,” said Mr Shaffer.

Councillor Guy Nicholson, Hackney Council’s Cabinet Member for Regeneration, said: “The council has made it clear to Transport for London that it cannot support the proposed demolition of properties in and around Bradbury Street, and is supporting residents and businesses in calling for a fundamental rethink on the proposals.

“There is also a great deal of concern about the proposals to construct a ventilation shaft in nearby Birkbeck Mews. This could have a serious impact on the day-to-day running of Ridley Road Market as well as the nearby Colvestone Primary School.”

TfL said it is still analysing the 20,000 responses to the Dalston consultation and a decision about the site has not been made.

Hackney Mayor Jules Pipe has welcomed the Commission’s recognition of the value of including an ‘eastern phase’ of the line, which would extend it to the east through Hackney.

The Commission said an eastern phase “could bring greater overall benefits” including by “unlocking housing and economic growth in the east of the capital”.

Mayor Pipe said: “I particularly welcome the recognition given to a potential eastern phase, which would create hundreds of thousands of new homes and jobs across East London and Essex, attracting huge investment and boosting the national economy.

“It is crucial that the government commit to an eastern phase as soon as possible.”

Crossrail 2 Managing Director Michèle Dix said: “We welcome the Commission’s ringing endorsement that the case for Crossrail 2 is well founded and should be taken forward as a priority.

“The report is clear that Crossrail 2 is an essential response to the challenges the region faces – and that funding must be made available now to fully develop the scheme.”