What is fossil fuel divestment?

Simply put, divestment is the opposite of investment. It is when an organisation or individual decides to stop investing in certain companies.

The fossil fuel divestment movement is calling on universities, hospitals, local authorities, museums, banks and pension funds across the world to remove their investments from the top 200 oil, coal and gas companies – for both environmental and
financial reasons.

Why divest from fossil fuels?

The scientific community is clear that the world needs to stay below two degrees Celsius of warming if we are to avoid dangerous levels of climate change.

It is estimated that 80 per cent of the known reserves of fossil fuels need to stay in the ground if we are to stay below this level of warming.

Despite this, fossil fuel companies are still planning to extract and sell these reserves of oil, coal and gas – indeed, they are spending billions of pounds searching out new sources of fossil fuels. These companies are setting the earth on the path to environmental catastrophe.

Leading economists are now also supporting divestment: they argue that oil, coal and gas companies are hugely over-valued because international action on climate change will curb the use of fossil fuels, rendering fossil fuel assets currently worth billion of pounds worthless overnight.

Aviva, one of the country’s leading insurers, recently commissioned a study into the possibility of a new financial crash caused by the ‘carbon bubble’, whilst HSBC, in a recent briefing to investors, suggested that fossil fuel companies could soon become “economically non-viable”.

Mark Carney, the Governor of the Bank of England, recently warned financiers that “the vast majority of [fossil fuel] reserves are unburnable.”

Why does Hackney Council have £42m invested in fossil fuels?

Hackney Council has over £1 billion invested through its pension fund. The investment income from this helps the council to pay the pensions of its members. It is invested in a mix of government bonds, direct equities (i.e. John Lewis, BP, Tesco), and multi-asset funds. Hackney Council states that it “will not actively disinvest in companies for ethical, social or environmental reasons as this may impact on fund returns”. 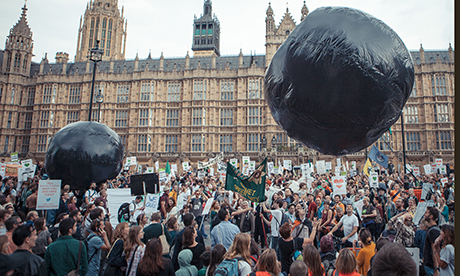 Why should Hackney citizens care?

Climate change is already responsible for 400,000 deaths a year worldwide, and it will soon affect us all in ways we can’t yet predict. Extreme weather events – such as the floods in Cornwall in 2010 – will become more common in the UK. In its own Climate Change Strategy, Hackney Council noted that the borough is particularly vulnerable to flooding.

Also, fossil fuels already negatively affect the health of Hackney residents: it is estimated that 9,500 people die in London every year due to air pollution.

We all use fossil fuels – isn’t divestment hypocritical?

This is true. We can’t escape fossil fuels; they are everywhere. But, there are things we can do that will help move our society towards being less reliant on oil, coal and gas.The technology already exists to replace these fuels with renewable energy, we just need the political will to make this happen. Divestment is an important step in the right direction, and will help create the political momentum for change.

Can the council divest easily?

Once an institution decides to divest, it can remove its direct investments in oil, coal and gas straight away – but the process for indirect investments can be somewhat more difficult. Hackney Council is being asked to commit to divesting within five years.

This is a realistic time-scale in which to make sensible, informed decisions about shifting investments away from fossil fuel companies. In 2014, over 200 institutions across the world, with assets totalling $50bn, made the commitment to divest from fossil fuels.

What has Hackney Council said about the fossil fuel divestment campaign so far?

Campaigners from Divest Hackney have met with members of the Pensions Committee to discuss the possibility of fossil fuel divestment. The Committee meets four times a year to discuss the performance of the fund, and makes decisions about where to invest its money. The response so far has been quite cautious, but they have agreed to conduct a review of the financial impact of fossil fuel divestment – campaigners understand that this review will be discussed at the January Pensions Committee meeting.

What would Hackney Council divesting achieve?

It is unlikely that the divestment movement will move significant amounts of capital from the likes of BP and Shell any time soon, but it will help to put pressure on those companies and on politicians.

As with the tobacco divestment movement of the 1980s, and the anti-apartheid boycott, divestment sends a political signal to the oil, coal and gas industries that they need to change.

Would divesting have a negative financial impact on the Hackney Pension fund?

No. In fact, if Hackney had divested four years ago, it would probably be better off than it is now. A recent study by MSCI, one of the world’s leading providers of financial services, found that ‘Fossil Free’ portfolios had outperformed those that invest in fossil fuels over the last four years.

How can I get involved?

1. Learn more at The Hackney Divestment Debate: Join representatives from Hackney, local activists, climate scientists and financial experts to learn more about fossil fuel divestment, and why it’s important for Hackney. The debate will take place at the Arcola Theatre in Dalston on November 1 between 4pm and 6pm.

2. Sign the petition: Over 700 people have now signed a petition calling on Hackney Council to divest from fossil fuels. Add your name by visiting http://tinyurl.com/hackneydivest

3. Meet your local councillor: Meet  your councillor and ask them to raise this issue with Hackney Council. Use this FAQ as a starting point; you can find councillors’ details at
hackney.gov.uk/findmycouncillor.

4. Join Divest Hackney: Join the divestment team, and get involved in organising events, planning actions, and petitioning over the coming year. Email divesthackney@gmail.com

2C – Scientists and policy makers are clear that a rise in temperatures by more than 2C by the end of the century would lead to disastrous consequences for our planet.

2795 gigatons – This is the amount of carbon dioxide that would be released from the proven reserves of fossil fuel if they were burned.

565 gigatons: Scientists estimate that we can emit 565 more gigatons of carbon dioxide into the atmosphere by mid-century and still have some reasonable hope of staying below 2C warming.

← Titbits — In vogue politicians, prohibition and spinLeader — Council should put its money where its mouth is →