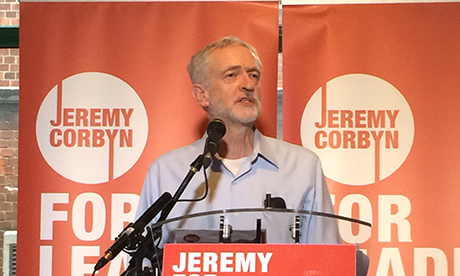 Arts for all: Jeremy Corbyn launches his arts policy at the Arcola Theatre in Dalston. Photograph: Ella Jessel

The arts should be accessible for all, the Labour leadership frontrunner Jeremy Corbyn told supporters in Hackney yesterday evening.

The left-wing Islington North MP, tipped to win the Labour Party leadership against the odds, launched his “national strategy for the arts” in front of a packed Arcola Theatre bar.

Under the Coalition government, Corbyn said, policy makers defined the contribution of the arts “in terms of economic value”, rather than their “intrinsic worth”.

Corbyn’s pledges included reversing funding cuts in the arts, bringing back the UK Film Council, improving access to art and cultural activities, tackling the exploitation of artists and performers and promoting diversity.

“Unfortunately because of the process of slightly, or very, elitist funding, because of the underfunding of local arts projects and the insufficiency of facilities in schools for music and other creative ability it gets snuffed out, ignored and forgotten.

Corbyn promised to protect the BBC, telling the audience they should “defend the principle of licence-fee paid for public broadcasting in Britain.”

He said local government arts funding should be ring-fenced, and that the arts council should be “fully funded” and encouraged to distribute money to regional as well as national arts institutions.

The comedian Jeremy Hardy, recently banned from voting in the Labour leadership election by the party’s vetting process, hailed Corbyn as a great “libertarian socialist”.

Hardy said: “What we saw under the old conservatives was paternalistic elitism, under Thatcher there was philistinism and then there was Blairism which was a great period for war artists, obviously.

“Now we have this awful pick and mix millionaires playboy consumerism in the arts. You’ve got your kitchen, you move up from IKEA and then you can afford the arts.”

“What we have now is ‘the arts’ where a group of well-to-do people get a pot of money and they decide where it goes and no one in government really cares.” 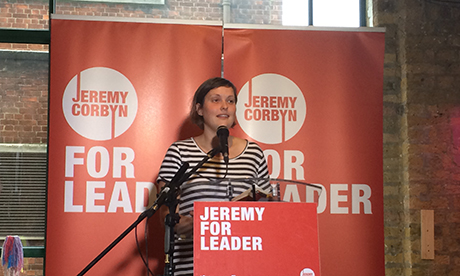 Speaking to the Hackney Citizen, Long said she was a “long term admirer” of how Corbyn “voted with his conscience”. “I think he is on the right track. Over the last five years the arts have been massively maligned in this country.

“The arts are massively important for our export , if you want to talk about money, but also for our well-being and our lives. Everyone should have the chance to participate and enjoy art.”

Fashion designer and activist Katharine Hamnett CBE described Corbyn as “a real democrat, in the old traditional sense of the word”.

When asked what she thought about Corbyn’s sartorial choices, Hamnett said: “I love it – jumpers knitted by his mum – perfect. You don’t need to wear a suit, informality is his power. I love the fact he wears vests under his shirt, the simplicity…”

Asked by an audience member what was the last piece of artwork he created, Corbyn said: “I’m not going to let you hear it or publish it so it’s going to remain private, but I do write quite a bit poetry myself, largely on trains, sometimes late at night and sometimes early in the morning.

“I also do totally random paintings which are abstract beyond belief. Somebody looked at one and asked me to describe it and I said you describe it to me because I haven’t a clue what it means. I find the combination of colour and movement fascinating, I also enjoy making things with wood and growing plants.”