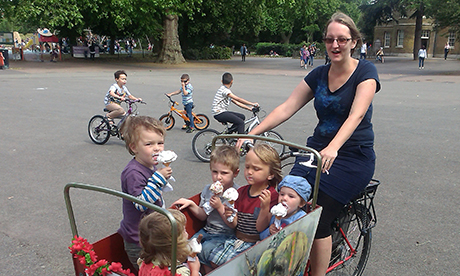 Cycling campaigners are “deeply concerned” at Hackney Council’s proposals to introduce two-way traffic on a Homerton street and scrap its cycle lane.

The Council is consulting on plans to convert Wick Road into a two-way street between Kenworthy Road and Morning Lane and reverse the flow of traffic on Brushfield Road.

Supporters of the scheme insist the scheme would reduce traffic and that once the street was converted the cycle path – only installed to allow cyclists to cycle both ways – would be redundant.

But critics accuse the Council of failing to consider the needs of cyclists.

Dr Rachel Aldred, Senior Lecturer on transport at the University of Westminster and Hackney resident said: “It’s very disappointing to see plans to rip out a cycle track that provides a safe link on a key North-South cycle route, in a part of the borough where walking and cycling are badly blighted by busy roads.

“If we want to encourage cycling by people of all ages and abilities, pushing them onto traffic-choked B-roads to share with HGVs is a clear step in the wrong direction.”

Dr Aldred called on the Council to reconsider the plans and “think more radically” about prioritising people over motor traffic.

Speaking on behalf of campaign group Hackney People on Bikes (HPOB), Ruth-Anna Macqueen said the group was “deeply concerned” by the Council’s proposals for Wick Road.

Macqueen said: “We are unclear as to why the plans remove a safe, well-used cycle lane which provides an excellent link between quieter roads, and why there is an apparent failure to consider the needs of people on bikes in the new designs.”

Katy Beale, 37, who has lived in Homerton for over ten years said the road is often used a cut-through. Beale said: “The changes to Wick Road will massively impact us.

“I will no longer be able to cross Wick Road safely on the cycle route with my nine year old son on his way to and from school as they are removing the cycle lane. Cycles who wish to do so will have to run the gauntlet of two-way traffic.”

However Councillor Vincent Stops said the two-way road was a “fantastic scheme” that would unravel the one-way system currently “blighting the east of the borough” and lead to more direct bus services and cycle journeys.

Cllr Stops said: “This scheme will mean slower, safer speeds. One-way systems were put in, in the sixties and seventies, to increase traffic capacity so it is bizarre that some are making the case that taking them out would increase traffic.

“The cycle lane on the pavement was installed to facilitate two-way cycling and so now becomes redundant for most cyclists.”

Hackney Wick councillor Chris Kennedy added that the stretch of road was currently “like a two lane drag-racing track” cutting through the Gascoyne II Estate. 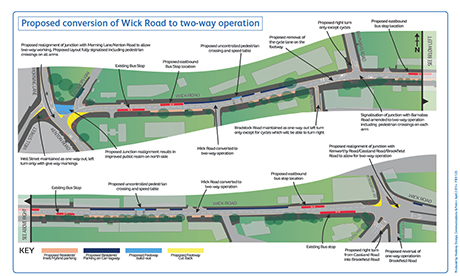 Responding to the councillors’ comments, Macqueen said: “Hackney Council often claim that simply reversing one-way systems improves the situation for people on bikes. This is simply not true, as attempting to navigate Shoreditch by bike makes abundantly clear.

“HPOB believe that the Council is once again letting its ideological opposition to protected cycle lanes stand in the way of providing safe and inviting facilities for people on bikes.”

Hackney Cycling Campaign are in the process of preparing a response to the scheme so could not provide comment when approached by the Hackney Citizen, but have previously advocated dismantling the one-way system in Victoria and Wick wards.

A Hackney Council Spokesperson said: “The plans for Wick Road are in the consultation stage until 10 July. We welcome feedback on the proposals, all of which will be taken into account when making a final design decision.”