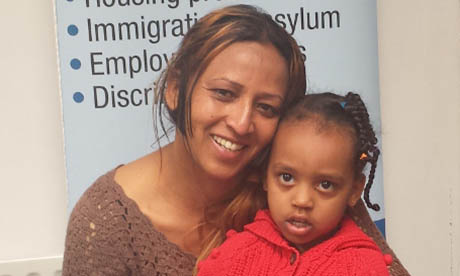 Saba Haile and her daughter

Hackney Community Law Centre (HCLC) is celebrating today after its legal team won a Supreme Court victory that could change the way local authorities interpret the definition of ‘intentional homelessness’.

The case, known as Haile v the London Borough of Waltham Forest [2015] establishes a new legal test for intentional homelessness to which every UK local authority will now have to adhere.

In a ruling that marks a “significant departure” from 20 years of settled law, an appeal was allowed against Waltham Forest Council’s decision that a young pregnant woman, Saba Haile, had made herself ‘intentionally homeless’.

Ms Haile left a hostel for single people when she became pregnant, because the “terrible living conditions” exacerbated her morning sickness to such a degree that she feared that she might lose her unborn baby.

When she made a homelessness application to Waltham Forest Council they decided that she had made herself ‘intentionally homeless’  because she had left of her own free will.

The council therefore refused to help with her accommodation – despite the fact that when her baby was born she would be forced to leave the hostel in any case.

But the court ruled that Waltham Forest Council should consider not only what caused Ms Haile to become homeless at the time she left the hostel, but also whether there was a “continuing causal connection” with her homelessness when the decision was made.

In the judgement, Lord Reed said: “The birth of the baby meant that the appellant would be homeless, at the time when her case was considered, whether or not she had left the hostel when and for the reasons she did”.

HCLC’s Senior Housing Solicitor Nathaniel Mathews told the Hackney Citizen that authorities had to satisfy themselves that people were not leaving accommodation in order to “queue-jump” housing waiting lists.

Mathews said Waltham Forest’s decision was a “cruel refusal” but also added: “It illustrates the pressures on local authorities, to find a way to say ‘no’.”

Speaking after the judgement, Ms Haile thanked HCLC and her solicitor Tayyabah Ahmed for winning her case. She said: “I am so emotional. I could almost faint. I can’t express how I’m feeling. I’m overjoyed. It’s been four years. I felt like I didn’t have my rights. I was living in terrible living conditions.

“Hackney Community Law Centre have done an amazing job. When we were appealing to the Supreme Court, I told Tayyabah to forget it. I was exhausted but Tayyabah said we had to keep going and that we couldn’t give up.”

The solicitor in the case, Tayyabah Ahmed said she was “ecstatic” with the verdict: “This is a fantastic result for applicants as well as a practical and necessary guideline for local authorities. I am really pleased that Hackney Community Law Centre was able to advance our argument all the way to the UK Supreme Court”.

A spokesperson for Waltham Forest Council said: “Waltham Forest is and remains committed to providing housing for homeless people who have the right to it.  In this case the Council based its decision on longstanding case law and the commonly held legal  interpretation of the rules. The Council respects the court’s decision and will of course reflect it in future cases.”