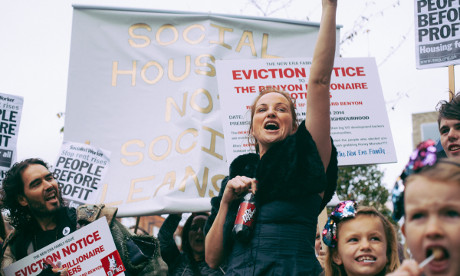 A campaigner who successfully fought off developers on Hoxton’s New Era estate has announced her intention to run for Mayor of London.

Lindsey Garrett is standing as a candidate for new political party Something New in next year’s elections, promising to improve the lot of London’s renters and stop the capital becoming a “playground for the rich”.

The NHS worker, who led the Russell Brand-backed campaign against US property firm Westbrook to stop the evictions of 93 residents from the New Era estate, has signed up Director of Generation Rent Alex Hilton to run her campaign.

In her draft manifesto, Garrett says: “Our city is divided between those who struggle to make ends meet and the wealthy whose pleasure and entertainment are catered for.

“We deserve a city that everyone can enjoy; where everyone’s ambitions are nurtured; where we’re not ground down daily by insane rents and mortgage payments.”

“More than ever, real Londoners need a voice and that’s why I’m putting my name forward for London Mayor. I’m standing because the only choice is Labour or Conservative, and neither option is good enough.”

Lindsey Garrett is crowdfunding to raise the £30,000 needed for the campaign.

The housing campaigner will be up against the MP for Hackney North and Stoke Newington Diane Abbott, who has launched her campaign to become Mayor of London.