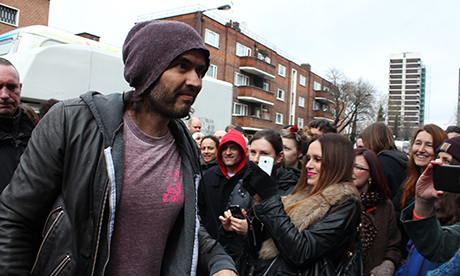 Charisma: Russell Brand at the opening of the Trew Era Cafe in March. Photograph: Ella Jessel

Russell Brand has declared that voting in the General Election is irrelevant in the face of inequality in the UK.

The comedian turned activist was speaking at Hackney Picturehouse on Tuesday night at a special screening of his new documentary The Emperor’s New Clothes.

The documentary, which is released in cinemas on 24 April, focuses on inequality in the UK and features interviews with low-paid and disabled workers about the effects of welfare cuts while attacking austerity, tax avoidance and bankers’ bonuses.

Talking to the Queen guitarist Brian May, who was at the screening, Brand defended his stance not to vote next month, saying: “I think people want me to talk about the election but watching it again it just makes me think there’s no justice, it’s dead.

“What I most support is people becoming activated.”

The film, made last year with director Michael Winterbottom, follows Brand from his home town of Grays, Essex, to London before heading to New York. Along the way Brand talks to economic experts and tries to question Lord Rothermere about his ‘non-dom’ tax status, as well as the heads of RBS and Lloyds bank about their bonuses.

“Watching it, I get angry again,” Brand added. “Because there’s an election it’s a good time to market a film about politics and people are more aware of politics.”

Russell Brand is to introduce another special screening of The Emperor’s New Clothes at the Rio Cinema on Wednesday.