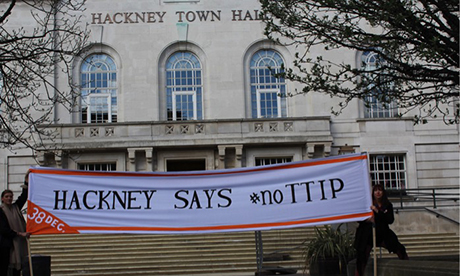 Campaigners from 38 Degrees unfurl a banner outside Hackney Town Hall.

Protesters held a rally outside Hackney Town Hall this weekend against a trade deal between the USA and Europe they fear will have a “toxic” impact on worker’s rights and consumer protection in the UK.

The demonstration by members of campaigning community 38 Degrees, environmental group Sustainable Hackney and local residents was part of a global day of action against the controversial Transatlantic Trade and Investment Partnership (TTIP).

TTIP is a proposed free trade agreement which will reduce restrictions on the flow of goods between the US and countries within the European Union. It is expected to be finalised in early 2016.

Critics of the deal claim it would increase corporate power and make it more challenging for governments to regulate the markets for the benefit of the public, while its supporters say the deal will encourage multilateral economic growth. 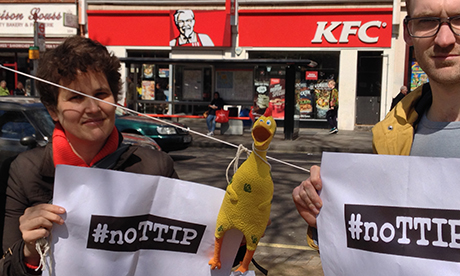 Campaigners are concerned at the impact the deal will have on food standards.

Local members of campaigning community 38 degrees argue that the deal would have a negative effect on local businesses. Hackney resident and 38 Degrees member Cyril Couve urged Hackney Council to follow other local authorities and “declare its opposition to TTIP.”

He said: “TTIP will prevent Councils from giving preference to local suppliers of goods and services over large multinational corporations, who openly avoid paying taxes and take the money out of the local community.

“And shipping goods across the Atlantic adds to the cost and is harmful to the environment – as the parties themselves acknowledge. We want Hackney Council to follow the example of some other local authorities such as Lancashire and declare its opposition to TTIP.”

South Hackney resident Pat Mitchell said: “The deal is being been driven by the large multi-national corporations who want to water down or abolish regulations which protect food safety and standards, for example keeping out GMOs, protecting employment rights, animal welfare and the environment.

“It will also open the way for multinationals to take over the running of our public services, including the NHS.  And they will sue if a future government tries to take them back into public ownership”.