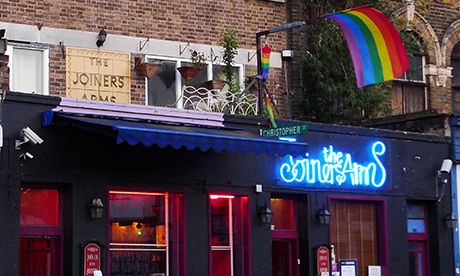 Supporters of a popular gay pub facing closure have launched a campaign to get the venue listed as an Asset of Community Value (ACV).

The Joiners Arms on Hackney Road, which was re-launched as a gay pub in 1997, is one of Shoreditch’s most legendary drinking establishments, known for its anarchic parties and inclusive door policy.

But The Joiners’ colourful existence will soon be over when the pub’s lease comes to an end on January 15.

The site has been earmarked for a large-scale private development and will be turned into flats.

A campaign has been launched to turn the pub into “London’s only LGBTQI democratically-run, cooperative community centre” whilst also keeping the “legendary pub” open.

A petition, started by a group called Friends of the Joiners calls on Tower Hamlets Council to accept the ACV nomination.

Brought in under the Localism Act in 2011, ACVs allow local groups to nominate buildings deemed to be of worth to the community.

Once a site has been registered as an ACV it means that if the site is ever offered for sale, community groups first have six weeks to submit a bid.

Campaigner Charlotte Gerada said: “We’re campaigning to save and evolve The Joiners Arms and secure Asset of Community Value status because The Joiners Arms is already considered an important social asset by many people in LGBTQI communities.

“The Joiners is a vital space for the LGBTQI community, not just in Tower Hamlets but across London.”

“We do not want to see another important community space like this be demolished in the name of more luxury flats, which are likely to be totally unaffordable to locals and serves to increase profit for property developers.”

“We are taking a stand to prevent another important space of value from becoming an artefact of history.”

There are three other ACV listed buildings in Tower Hamlets; Turner’s Old Star pub in Wapping, The Women’s Library in Aldgate and Stour Space in Hackney Wick.