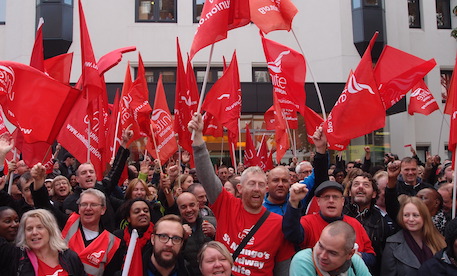 Staff at St Mungo’s Broadway have called off a ten-day strike due to start this morning after senior management backtracked on cuts to pay and conditions imposed during the summer.

However a planned rally outside the homeless charity’s head office in Hammersmith this morning went ahead albeit with a celebratory mood instead where chief executive Howard Sinclair spoke to workers and admitted responsibility for the dispute.

Staff had already taken part in a weeklong strike two weeks ago, but a complete turnaround by management during talks with Unite union officials yesterday at mediation service ACAS averted a second round of action.

Bryan Kennedy, a Hackney Unite housing representative, said: “[Management] capitulated on everything. They knew their charitable donations were going to be affected after councils, MPs and donors got behind the campaign.

“I think Hackney Council speaking out really helped. I think it put the wind up the management.”

Hackney Council announced two weeks ago it would re-evaluate its contract with SMB over concerns the quality of services it was paying for would be affected while MPs expressed their concern in parliament.

A Mare Street hostel worker who did not want to be named, said he was pleased at the outcome, but warned the damage done may be difficult to rectify.

He said: “It’s a good day today. Absolutely huge. We appreciate changes need to be made, but how they did it [without consultation] was completely wrong and they probably would have got away with it had we not had the union to support us.

“Hopefully [management] will speak to us as people now, not as fodder, because that’s how we felt. People have left in the last few weeks. They felt they couldn’t work here anymore. It’s a job that’s not easy, and to treat us like that when we have to put up with some of the things we do, it’s just not on.

“But the damage has been done now and we know what their game is for the future and it’s not one that people can stomach, that’s not what I joined St Mungo’s Broadway for.”

SMB’s chief executive Howard Sinclair, who had been the sole target for blame throughout the campaign, surprised staff when he spoke at the rally this morning. After taking responsibility for the dispute he asked for staff and management to come together for the sake of clients and charity.

Amid calls for him to hand back his £30,000 pay rise, he said, referring to government cuts in funding: “All I know is that society has some choices about how it allocates its money and the vulnerable and homeless should be at the top of that list.”

Adam Lambert, SMB’s Unite the Union convenor, praised the staff for their commitment to the campaign and thanked councillors, MPs and supporters from across the country for their support.

He said: “People make difficult choices when it comes to strike action, and there are many excuses not to do so, but you did participate and because you showed unity and strength you won.

And striking a conciliatory tone, he said: “The union has delivered a lot of ultimatums to management in the last few months, but the time is right for a new way of working and if the management now respects the quality of services, the rights of the workforce and the strength of the union then there needn’t be a battle between us and we want them to continue with us in that spirit.”

Bryan Kennedy, a Hackney housing representative, said: “People have to remember this day. Sinclair said he was going to sit this out. Well he hasn’t. He couldn’t take a second round. This is the best campaign I’ve ever seen.”

Staff will return to work on the same terms and conditions they were on before the dispute.