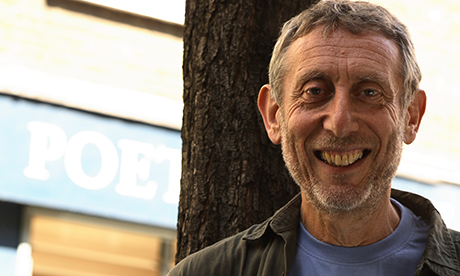 Michael Rosen seems to go out of his way to look silly.

A quick Google image search turns up thousands of results showing him puffing out his cheeks, poking his ears, opening his eyes as wide as possible. He speaks in playful soundbites, but look any closer into Michael Rosen and there’s no concealing that he is a very serious man indeed.

The former Children’s Laureate, professor of education, broadcaster, poet and impassioned critic of Westminster’s education policies has made no secret of his disenchantment with government – but he has no intention of entering it. The frustrations would be far too great to balance the power one may have, he tells me.

Among his various methods of “pissing in”, Rosen sounds off his disapproval in his weekly Guardian column, Letters to Mr Gove, now addressed to the new education secretary Nicky Morgan.

In this summer’s cabinet reshuffle Morgan, who voted against gay marriage, was named minister for women and equalities, as well as education secretary – a contradiction in terms according to Rosen.

“It’s really quite outrageous that someone who’s in charge of schools which are committed to equal rights, in fact is opposed to gay marriage. This is a wonderful new civil right that is being won. We finally got here and there you are, the minister of education, opposing it.”

Throughout his career, Rosen has been called to the House of Commons to meet with ministers about his ideas on education. What’s it like to talk libraries and ‘reading for pleasure’ with the likes of Ed Balls, Nick Gibb and Margaret Hodge?

When speaking on the politics of education, Rosen’s voice is filled with ire. But on the subject of learning itself, he visibly – audibly – bursts with excitement, regularly employing anecdotes from his own sprawling family to illustrate the fun that can be had through learning.

Having brought up seven children between the ages of nine and 37, Rosen calls himself the “longest running school parent in existence”. It is this, and other apolitical experiences, from which Rosen draws the wisdom in his latest book, Good Ideas – How to be Your Child’s (and Your Own) Best Teacher.

Here, in the interest of learning, Rosen ditches politics and schools altogether, and focuses on families, encouraging mutual fascination between parents and children, and an education led by investigating passing curiosities – in the car, in the kitchen, on the street – with rigour and enthusiasm, and responsible use of Google and Wikipedia.

Good Ideas is for parents, Rosen makes clear (“I wouldn’t want that to be misunderstood” he tells me).

Nevertheless, Rosen has hit a nerve with teachers. Perhaps he illustrates the way they’d like to be able to approach their jobs, but can’t due to the pressure of curricula and exams.

“The whole of education is surrounded with a postponement of when you can really conduct original research,” says Rosen.

“In actual fact, any kindergarten teacher will tell you that you can do original research with four-year-olds. Take some around an aquarium with some snails in it, and you ask the children to observe and talk about the snails. That is original research.”

After all, it was teachers who dominated the Q&A session of his recent talk at Stratford Circus. One primary teacher from Stoke Newington described him as her “hero”.

Books have to be marketed to someone, of course, but it would be a waste for this one to be confined to the ‘parenting’ genre.

Yes, Rosen’s anecdotes of joyous shared learning between parent and child, filtered through a bit of cynicism could seem a bit unrealistic, or even utopian.

But we follow other people in striving for so many things – the perfect job, the perfect relationship, the perfect bum. Good Ideas makes a compelling case to try harder. As Michael Gove often said: aim high.