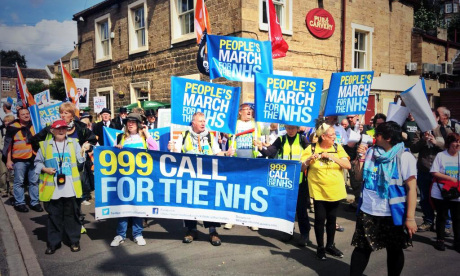 Members of the People’s March for the NHS in Wakefield on 24 August. Photograph: 999 Call for the NHS

A march to save the NHS will pass through Hackney tomorrow, then head through London to a rally in Parliament Square outside Westminster.

The march, known as the People’s March for the NHS, is the final leg of a 300-mile march that began in Jarrow on 16 August. The 22-day march aims to raise awareness about threats to the NHS.

The march begins in Edmonton and continues south along the A10, before stopping for lunch at 12 noon in Clissold Park in Hackney, where members of local campaign groups such as Hackney Keep Our NHS Public and Save Our Surgeries, including Hackney GP Coral Jones, will greet them.

Jones said: “We’re joining the marchers to highlight the fact that, in Hackney, we’re desperately worried about the 22 east London GP surgeries that may have to close because of NHS cuts. We’re also unhappy at the other cuts and service changes we’re seeing across the borough.

“We have nothing but admiration for the dedication of the marchers. We owe it to them and to the NHS to give them a big welcome on Saturday.”

According to Rehana Azam, the march’s co-ordinator, around 15-to-20,000 people have either taken part or shown support online and the response to the march has exceeded expectations. Anyone is welcome to join the march and a meeting point has been organized at Red Lion Square near Holborn.

Inspired by the 1936 Jarrow March, which protested against poverty and unemployment in north England, the current march was organised by Joanna Adams from Darlington.