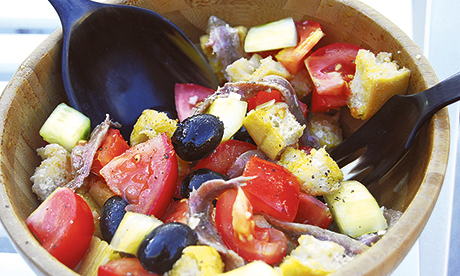 Your jaded food historian, in recovery from the Oxford Symposium on Food and Cookery, is wilting in the heat, and looking for inspiration for refreshing meals to put together quickly at home, using what is to hand.

If you’ve shopped recently in Church Street there are nice ripe tomatoes and fresh herbs from the Turkish greengrocer’s. And it is but a step to the High Street, where Michele at Gallo Nero will tell you all you need to know about panzanella, a tasty Tuscan salad made of stale bread and tomatoes. Michele will scold you for wasting left-over bread; he turns his into coarse or fine breadcrumbs, and this recipe will spare you even that chore. Just never ever even begin to contemplate making this dish with anything but the best quality bread, the tastiest tomatoes and the richest most fragrant olive oil.

But make no mistake – this is peasant food. It’s what you make when there is nothing in the larder, with stuff from the kitchen garden and orchard. As timeless as the ancient Tuscan landscape in which it evolved; well, no, bollocks to that, the main ingredient, tomatoes, were late-comers on the scene, and for many years considered deeply suspect and probably poisonous.

“Just a pretty face” as the naturalist Costanzo Felice said. Before that you would have used cooked or raw green things, onions, garlic, basil, and the olive oil from your own terraces.

The technique was to soak the obdurate lumps of hard bread in a mixture or water and vinegar, squeeze them dry, and stir into the other ingredients, rest awhile for the flavours to develop, then serve. The tired old bread is invigorated by the moisture and heaven knows what enzymes are getting to work in the cocktail of ingredients, the change in flavour and texture is nothing short of miraculous.

So it was only a short step to a posh version for the gentry, capon magro, a salad that probably originated with the mariners of Genoa, who softened hard tack with sea water and piled on it whatever they had to hand, layers of cooked fish, hard-boiled egg, salad leaves, olive oil and  seasonings. Capon magro means lean day capon, for enjoying on days when the Catholic church forbade meat, fowl and dairy products.

This sumptuous vegetarian dish can be enriched with shavings of bottarga (the salted and dried roe of grey or flathead mullet) an expensive Sardinian delicacy which you can get in many delis), cooked prawns, sliced hard-boiled eggs, in classic versions where, on a base of hard stale bread, you can construct a vast pyramid of ingredients, layered with a herby green sauce, or some pesto, and top with a whole lobster, if feeling regal.

or a baguette), cut into cubes

A small cucumber, peeled and

chopped, then salted for an hour or

so, rinsed and squeezed dry

Some salted capers, soaked and

Mix all the ingredients in a capacious salad bowl, and give the flavours time to amalgamate. Stir well and serve.

← ‘This land is our land’: the Lammas Day ‘riots’ of August 1892Roundabout way to regeneration? Fears that Hackney’s Tech City will become a ghost town →