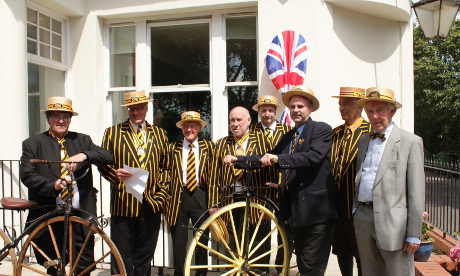 Wearing jaunty straw boaters and impeccable striped blazers the gentlemen of the Pickwick Bicycle Club met on Downs Road last Sunday to unveil a plaque in their honour, reminding the borough of its rich cycling history.

The Pickwick Bicycle Club was founded in Hackney Downs in 1870 – back in the “dark ages of cycling”. The club was christened after Charles Dickens’ first novel the Pickwick Papers and is both the oldest cycling club and Dickensian society still running in the world.

All the members of the club are known by sobriquets and are named after the male characters in the Pickwick Papers such as Alfred Jingle, Sergeant Buzfuz and Mr Dumkins. The club President is always known by the name of the main protagonist Samuel Pickwick. 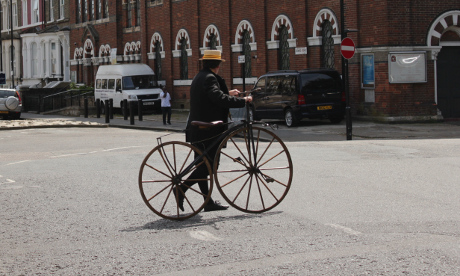 Current club President Mr Pickwick, otherwise known as Peter Legg, said that the former Downs Hotel was the true home of the club and that the history of the club is “all around Hackney”.

He said: “The founding members were pioneers of the bicycle. They had also held a few excursions and wanted to associate themselves more closely by forming a club at which meetings could be held, as they put it in their quaint way, for ‘social intercourse’”.

Extracts from the club’s history describe how in the nineteenth century Hackney’s streets were perilous. Riding together gave the Pickwick Club’s members safety in numbers, helping them to avoid “hooligans” who frequently attacked the cyclists.

A commemorative plaque marking the home of the club was fixed to former Downs Hotel building in 1996 but when the building was turned into flats years later it was stored “so carefully that no one could find it”, explains Mr Pickwick.

Before the unveiling of the new plaque, which was witnessed by recently appointed Speaker of Hackney Cllr Sharon Patrick, the members gave a demonstration of their vintage bicycles.

A crowd of Hackney Downs park-goers looked on as Bullman and Mr Dumkins rode their vintage bicycles on Downs Road. 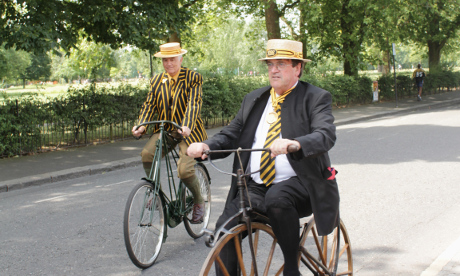 The aptly named Bone-shaker bicycle from 1807 has wooden wheels with iron tyres and its sixty-pound frame was maneuvered skillfully by Club Secretary Sergeant Buzfuz. Bullman rode a handsome bottle-green 1907 Dursley Pederson with a distinctive hammock-style seat.

Hackney Speaker Cllr Sharon Patrick said: “I was very pleased and honoured to be asked to unveil the new plaque for the Pickwick Bicycle Club and to learn about its history as the oldest-recorded bicycling club in the world.

“Hackney Council has an excellent reputation for supporting cyclists and I was delighted to meet the members and see their historic bikes. Hackney is a biking borough and it’s good to know that our residents enjoyed cycling in the past nearly as much they do today.”

She added: “I would also like to thank the residents of the former Downs Hotel, where the club was formed, for their hospitality in offering the club members, me and my consort cordial to drink on what was a very hot day.”